Verloc (Homolka) is a secret agent of a foriegn power who plans devestating acts of terrorism and sabotage In London from behind a facade as a harmless operator of a small movie theater. Verloc is devoted to his cause, but how firm will his wife (Sidney) stand? 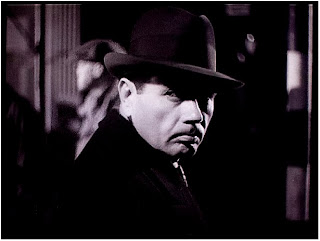 "Sabotage" is one of Hitchcock's early films, and it is one of his best. The sequence where Verloc sends his wife's young brother, Stevie (Tester), to deliever a package that, unbeknownst to the brother, contains a time bomb, remains one of the tensest sequences ever put on film: Stevie, a mere child, takes every detour, is distracted by every interesting scene and event, and is slowed down in a hundred different ways during his trek across London... all while the bomb is ticking toward its detonation. Will the boy survive, or will Hitchcock violate what has been a standard from the earliest days of cinema... the cute young child is NEVER killed! (If you've read the Joseph Conrad novel "The Secret Agent", you know the fate of Stevie even before Verloc decides to use him as a courier, but the sequence is so fabulously put together that you will be on the edge of your seat.)

With great pacing, perfect casting (the actors seem as though they've lept from the pages of Conrad's book) and some playful crossovers between the events of the story and the movies showing at Verloc's theater, "Sabotatge" ranks among one of Hitchcock's most thrilling films.