When Archer Coe (Barrat) is found dead in a room locked from the inside, the police assume he killed himself. Celebrated private detective Philo Vance (Powell) believes he was murdered and he proves his suspicions true in fairly short order, even figuring out the solution to the "locked room mystery." But when his prime suspect (Morgan) is also found murdered and everyone else who is even remotely connected to the case had very good reasons to want Coe dead, Vance may for the first time be faced with a mystery he is unable to solve. 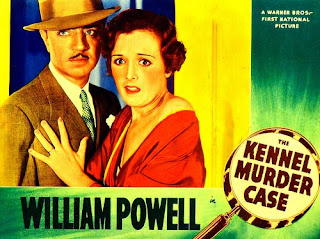 "The Kennel Murder Case" is a tale of high society murder that features a mystery so tangled that is bound to keep you guessing up to the very point where Vance tricks the murderer into revealing himself. (In fact, the case is so complicated that if Vance hadn't found another angle of attack by sheer luck after the loss of his first suspect, it might have gone unsolved, or perhaps even more victims would have been claimed by the killer.) It's a film that anyone who enjoys classic mysteries will love very much.

Aside from being an excellent mystery film, it should be of interest to anyone who has enjoyed William Powell as Nick Charles in the Thin Man series. Powell shows that he is just as capable and engaging in the role of a more traditional "consulting detective", including to the point that he is part of the upper-crust society he rubs shoulders with (as opposed to Nick who married his way into it). Vance also solves his crimes sober, and it's interesting to watch Powell play a sober detective who gets by equally on his sharp wit, powers of observation and deduction, and a charming manner that makes him liked even by most criminal types.

"The Kennel Murder Case" is the only William Powell Philo Vance outing that is currently on the market in any format, a reflection of the changing tides of popular culture. In 1933, the Philo Vance character was perhaps more famous than even Sherlock Holmes, but 75 years later, he is all but totally forgotten.