'Mabel's Blunder' will be your entertainment

A young secretary (Normand) comes to believe her fiance (McCoy) may be cheating on her with a strange, beautiful woman (Nelson) he's being awfully familiar with. To keep an eye on them, she trades clothes with her brother (St. John) and poses as their driver as they head out to a garden party. Things get complicated when her boss (Bennett), who also happens to be her fiance's father, decides to puts the moves on the cross-dressing brother... 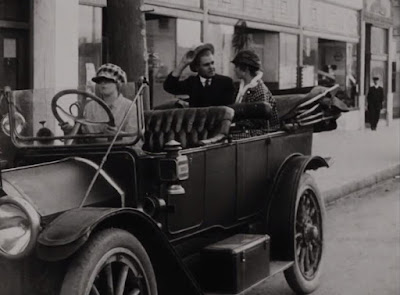 "Mabel's Blunder" is a swift-moving, charming farce that is lots of fun when it works, and a little annoying when it doesn't. It's also a little creepy at times. This feeling may be a result of cultural changes that have taken place in the more than 100 years that have passed since this film was released, just like it's story line has become predictable because it's been done hundreds of times.

I'm going to give away the "big twist" in the film, since I'm sure you'll see it coming anyway, just like did--the mystery woman is her fiance's sister, so Mabel's jealousy was her "blunder". HOWEVER, the brother and sister here seem just a little too physical in their effection for each other, with the the phrase "it's okay to love your sister, but you shouldn't love your sister" coming to mind while watching them. I dunno... maybe this is just one of those things that were seen differently by audiences when this film appeared more than 100 years ago at this point, but it seemed very odd to me. I, too, would have assumed they were lovers rather than siblings, given the way they carried on. Maybe I was just raised by cold and distant people and I don't know what affection truly is?

But, aside from what seems to be an overly physical relationship between a brother and a sister, the rest of the film is cuteness overload. Watching the lecherous boss hitting on who he believes to be the office secretary (who is actually her brother in a woman's coat, hat, and veil) is both uncomfortable and hilarious. The performances of the cast are also very entertaining, which isn't surprising when one examines the cast list; every cast member either was a big star at the time it was made (like Mabel Normand and Charles Bennett), or soon would be (like Al St. John and Charley Chase). 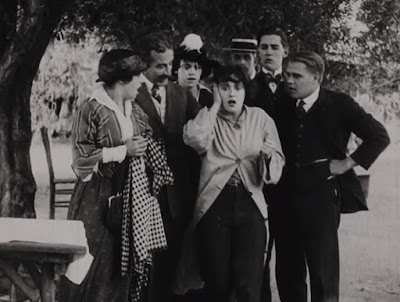 Star Mabel Normand is of particular note here. Although she is barely remembered today, she was one of cinema's early super-stars, and I think it's easy to see why in this film. She is even more remarkable in that she was one of those rare triple-threat filmmakers who was equally talented as a writer, director and actor: Normand was the creator of this film, and it's a shame that her career and life was disrupted and cut short by ill health, alcoholism, and just tragic, bad luck.

As entertaining as I found this film, it's not without its flaws. First, it could have used one or two more intertitles, as some of the action and character relationships remains a little unclear, even when everything's come together by the end. Second, at the opposite end of the scale from the problem with the lack of intertitles , we have Normand gesturing over and over and over, in scene after scene, to her character's engagement ring to remind viewers of how her heart and vows made are being betrayed by her fiance. It becomes tiresome very quickly, and it is the only weak part about the performances and pacing in this film.

Several versions of "Mabel's Blunder" can be watched for free on YouTube, but none of them do the film the sort of justice it deserves. All the ones I found are fuzzy visually and a few have completely horrendous and inappropriate musical soundtracks. I watched the film on the Netflix streaming service, in its Classics section, under the "Early Women Filmmakers" collection. I am embedding the best of the YouTube versions below, but I really recommend that you check this film out on NetFlix if you're a subscriber. (It's only 15 minutes long, so I'm sure you can find the time!)