Reporter Torchy Blane (Farrell) takes on the city's corrupt political machine and underworld power broker Doc Dolan (Miljan), and after losing her career due to political pressure, she eventually becomes a candidate for the office of mayor herself. 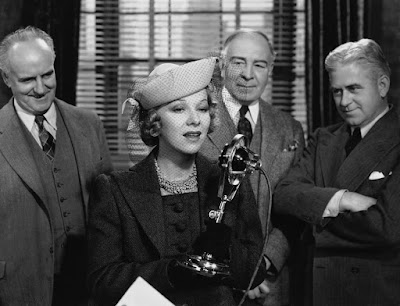 "Torchy Runs for Mayor" was the eighth film in the Torchy Blane series, and it's at once both one of the best and one of the worst in the series.

First, what makes this the best film in the series: We get a good look at Torchy (Glenda Farrell) plying her trade as a story-at-any-cost reporter. In too many of the previous films, Torchy's workday has happened off-screen, but here we get to see her no only go about her ethically and legally questionable (and outright illegal) information gathering methods, but also her dealings with editors and publishers, as well as her working to turn her source material into column inches for print. We get to see a realistic reaction on the part of the police force when they are placed under political pressure from corrupt forces in the sense that instead of railing against Torchy and trying to shut her down, they got out of her way and quietly encouraged her to keep digging and poking at the bad guys--except for her long-suffering boyfriend Steve (Barton McLane) who genuinely fears for her life. (Although he's not so concerned that he doesn't join his Captain is executing an elaborate prank that becomes Torchy's inspiration to run for mayor). We also get to see long-running comic relief character Gehagan (Tom Kennedy) show that he is a capable police officer and useful for more than just taking up space. This film also has one of the most serious storylines and thrilling climaxes of any of the ones in the series; there's a sense that the characters are actually in danger and that things may not work out for them in the end.

Second, what makes this the worst in the series: A potentially fantastic villain, Doc Dolan played by John Miljan, ends up as an uninteresting cypher. We're told how powerful he is in both political and underworld circles, but we only get the slightest hint of this and we're never shown where that supposed power comes from. More to the point, this supposed criminal and political mastermind has to resort to kidnapping Torchy during the film's second half, something the character himself admits to Steve is a stupid thing to do (as a way of denying he did it), but that then begs the question as to why he kidnapped her. This question becomes even more vexing when one considers that he kept her alive and unconcious for at least a couple days--why? Why not just kill her and be done with her? The answer remains as mysterious as the nature of Dolan's powerbase... but it does ensure that Torchy is once again reduced to damsel-in-distress at the end of her own story and must be rescued by Steve. And, finally, the film doubles-down on Torchy being "just a woman" by ending with her quitting the office of mayor that she has just won in a landslide election to go off and marry Steve and have babies. (Yes, I just spoiled the ending.) 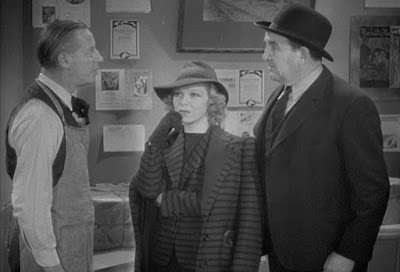 "Torchy Runs for Mayor" has the strongest script since the first couple of Torchy films, and the most dramatic storyline of all of them. As it unfolds, Torchy and Steve both are left without jobs, and there's a real sense that thnigs aren't going to end well for them as the story heads towards its climax. Naturally, things do ultimately turn out well for our heroes and heroine, and we're even given a sense of closure to the tale of Torchy and Steve that we've been following for the past seven movies; and it's a great closing, too.

At least it would have been if "Torchy Runs for Mayor" had been 20 or so seconds shorter. We still get closure for the story of Torchy and Steve, but it's a closure that betrays everything that Torchy has been about since she first strolled onto the screen, cracking wise. I realize that in the late 1930s, a woman's place was at home, but Torchy had been bucking that trend and fighting the good fight for eight movies, and now that she was in a place where she had the resources to really impliment change and justice on a large scale, she instead bows to conservative social convention and gives it all up--after the public clearly said they were okay with a woman mayor in charge of the city. (The only good point about this totally botched ending is that Steve is as taken aback by Torchy's announcement and total change of heart and character as I was. He was, naturally happy, as he and Torchy exited Stage Right... where I was left irritated and borderline angry to the point where the film dropped from a solid Seven Rating to a low Six.)

Although the story wraps up so neatly in this picture that it feels like the last "Torchy Blane" film, there was one more made. This film was the last for Farrell and McLane, but the characters they portrayed would be back, embodied by different performers. I'll find out if this should have been the last Torchy film, period, at some point in the future. When I do, I'll tell you all about it in this space.