Get ready with 'Captain Kidd's Kids'...

Today seems like the perfect day to review a silent pirate movie, and to embed it in the post so you can watch it right here. Why is that, do you ask? Well,. because it's Talk Like a Pirate Day tomorrow!

After falling overboard from a cruise ship, an obnoxious young man (Lloyd) discovers his fiancee (Daniels) and her shrewish mother (Gilmore) are operating a pirate ship crewed entirely by sexy women. 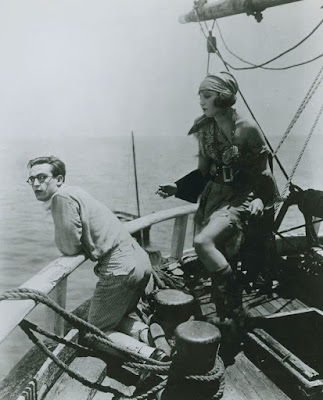 "Captain Kidd's Kids" is a short film that takes too long to get to the pirates promised in the title. It spends half of its running time hammering home how unlikable and dumb Harold Lloyd's character with a series of gags where he's abusive to his servants and other hired help. What's perhaps worse is that the gags are only mildly funny and every one of them outstays its welcome because the routines are too long.

Things get a better once we get to the ship full of sexy pirates, but even here the gags are weak. While none drag on the way the ones in the first half of the film did, they are mostly so predictable that they must have be old back in 1919. There is a very funny and surprising bit involving dinner time on the ship, it's satisfying to see Lloyd's servant throw in with the pirates and pay is boss back for all the abuse early in the film, and Lloyd's ukulele strumming inspiring an impromptu pirate chick dance party inspires a chuckle, but otherwise this is a rather disappointing affair... especially since the idea of Lloyd's dorky trickster character going up against a ship of sexy lady pirates is a concept that held so much promise.

"Captain Kidd's Kids" isn't a terrible move... it's just disappointing, because it falls short of what it could be. But why don't you watch it for yourself and tell me if you agree or disagree with my take on it? It's embedded for your convenience below.