Blake should have stayed lost in the fog

Sir James Blake (Rawlinson) retires from Scotland Yard so he can help a pair of young inventors (Byrd and Barlcay) complete their death-ray machine and get it safely to the League of Nations so they can use it to end all wars. But spies opposed to world-peace are lurking in every shadow.... 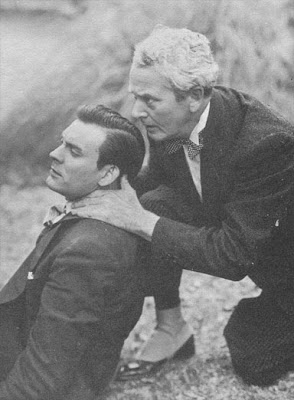 "Blake of Scotland Yard" is a movie that was created by editing down a serial... and it shows. Basically, it consists of a lot of characters running around and throwing punches at each other for unclear reasons, repeated establishing shots of the same strange French dive-bar, and sequences with a hunchbacked villain and his minions who seem to constantly change their minds about what their plans are in midstream.

This show was made in the late 1930s as a kids' program. I wonder how much kids liked it back in those days, but I'm certain they wouldn't like it today. Adults might get the occasional chuckle from some of the unintended comedy in the show, as well as some of the "topical references" which are just plain funny with 75 years of history between when they were made and now, but even they should be able to find better ways to spend their time... or at least something better to watch.