The Shadow missing in 'International Crime'?

There are times when I wonder why production companies who spend good money on licensing existing properties don't keep their writers and directors in line when it comes to creating the screen adaptations. Heck, I don't understand *at all* why the owners of properties that are licenced don't insist on some form of oversight and/or quality control veto-rights over what the licensee does with their creations. (And I hope to some day be fortunate enough to work on a propety where the owner doesn't care what the heck I do with it... so far, I've never quite been in that position, as every licensed property I've worked on has come with a very attentive and concerned person reviewing my work for the licensor.)

Take the truly awful adaptation of The Shadow that is "International Crime". In this film, Lamont Cranston is a hardboiled radio commentator and criminologist who has a bad relationship with the police and solves crime more through trickery than detection; he's basically a stock lead character for low-budget detective comedies from that era. There's none of the mystery (and none of the horror/thriller aspect) that surrounds The Shadow and his cases... and Lamont Cranston exhibits no supernatural ability to "cloud men's mind." His identity as The Shadow is widely known, as it's the name of his radio show rather than a secret alter-ego. 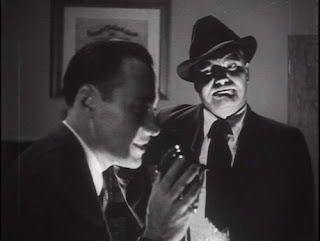 Worse, the ever-charming and resourceful Margo Lane from the real stories and radio plays, who was always there to help both Cranston and his Shadow alter-ego, isn't anywhere to be found in "The Shadow Strikes," and is replaced in "International Crime" by an annoying girl reporter (played by Astrid Allwyn, who is really the only attractive thing about "International Crime"... even if she shows virtually no acting ability).

All in all, this feels like someone took an unused script that was sitting around the producer's office and slapped "The Shadow" on it and renamed the main character "Lamont Cranston." However, the true is probably that Hollywood creatives were arrogant morons who felt they could "improve" upon properties long before "Modesty Blaise" and "Jonah Hex" (just to name two of dozens upon dozens of examples). The more things change in the film biz, the more they stay the same.