Available again... for the first time in five years!

In 1995, L.L. Hundal had an idea for a quick-and-dirty combat game for two players where each made a character, selected a few skills for them, and then set them about battling to the death. Steve Miller made a few contributions to it, and it was released into the Newsgroups as a freebie. It was a game that emphasized rollplaying over roleplaying. It ran about four pages.

That game was first coming of "ROLF!: The Rollplaying Game of Big Dumb Fighters"

In 2006, ID Adventures released a revised version of the game, illustrated with art by Larry Elmore. Miller expanded the game with a spell-casting system... because how can you possibly have your fantasy game system taken seriously if it doesn't have a spell-casting system? It was still designed for two players and it still emphasized rollplaying over roleplaying. It was now eight pages in length.

Now, in 2011, Steve Miller and NUELOW Games are bringing ROLF! back again... bigger and better than ever! "ROLF!: The Rollplaying Game of Big Dumb Fighers (Revised and Expanded... Because Bigger IS Better!)" clocks in at a massive 10 pages, and it can now be played by two, three, four, or even five players! It's still got gorgeous black-and-white Larry Elmore line-art, and it's in a handy-dandy PDF format for easy downloading to you computer, your iPad, and who knows where else? You can even print it on paper and have your very own old fashioned, paper-based game rulebook!

Oh yeah... and it still emphasizes rollplaying over roleplaying. 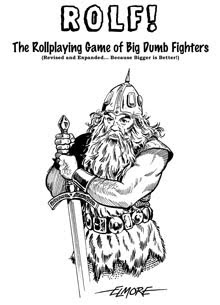 "ROLF!: The Rollplaying Game of Big Dumb Fighters (Revised and Expanded... Because Bigger IS Better" can currently be purchased for just $1 at www.RPGNow.com. If you you like RPGs and laughing with friends, I think you'll like ROLF! (The same might be true if you liked some of the humor in 150 Movies You (Should Die Before) You See, you might enjoy this also.

All proceeds from the sales of this game go to the Feed Steve's Hungry Cats Fund. Please buy your copy today!
Posted by Steve Miller at 3:53 PM