I'm starting the week with something a little different: An entire short film you can watch right here on the blog.

Jazz star Cab Calloway (Calloway) advises a porter to buy a radio in order to keep his wife from stepping out while he is away from home. Unfortunately, the wife (Washington) stays in with Cab Calloway himself.


This fun little ten-minute short features a trio of great Cab Calloway songs, including "The Lady with the Fan", a song written specifically for Calloway's Cotton Club show and performed here in his fictitious Cotton Club Show. They illustrate one of the things I've always found so much fun about Calloway's songs--characters appear in several of them, like Smokey Joe and Minnie--so they can combined to sort of tell larger stories. And then there's always the endless variation on the call "hi-de-ho."

Aside from the gag ending, this film is interesting from the point of view that it shows a black patron at the Cotton Club, a Harlem nightclub that was notoriously racist in its policy of only admitting white customers, despite specializing in black performers and black jazz music. By 1934, however, the policies had been been somewhat relaxed at the insistence of Duke Ellington, whose band and music had been a major part in building the club's high reputation. None the less, the black patron is shown separated from the rest behind a low wall.

Those were different times.

On the other hand, the film also shows that Cab Calloway would fit right into today's entertainment scene if he were a young musician and performer today. With the grasp of cutting-edge technology and tendency toward sex scandal on display in this film, Calloway might even be a politician Tweeting pictures of his penis for the world to see. 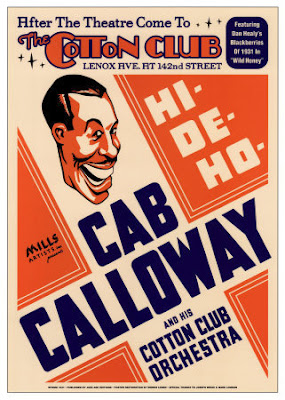