'Werewolf by Night' goes out howling

"Werewolf By Night" was one of several titles published by Marvel Comics that played off a mixture of classic movie monsters and 1970s exploitation movie fare. Following the exploits of reluctant werewolf Jack Russell, it was perhaps the most successful of the titles from a pure story-telling point of view, with a direction and tone set in the first few tales in "Marvel Spotlight" that continued with only a minor adjustment up to the title's cancellation with issue #42. 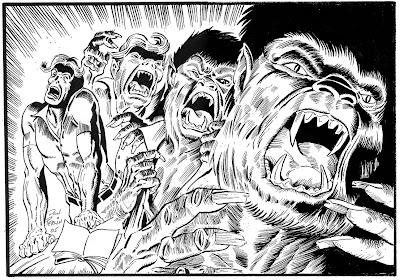 In this massive, low-cost black-and-white reprint book, Marvel Comics presents the second half of one of their greatest horror series, "Werewolf By Night", with the 20 issues of the regular comic benefiting from the presence of a single creative team of writer Doug Moench and artist Don Perlin, and a steadiness of story focus almost unmatched in Marvel's horror titles. Although the title passed through the hands of three different editors, Moench and Perlin seemed to be holding steadily to the same path the series had been following all along, avoiding the numerous re-inventions that kept causing Ghost Rider's motorcycle to sputter, as well as avoiding getting tangled up in too many subplots as Marv Wolfman did on "Tomb of Dracula". There are a number of story threads running through the book--including some that started in the previous volume, one or two of which were unceremoniously dropped by previous writers--and Moench and Perlin keep them all flowing and tie them up very neatly at exactly the right moment every time. They even managed to almost successfully usher the Werewolf into a position of viable superhero as Marvel's horror wave crashed, creating in the process a character that would go onto become one of the more interesting Batman knock-offs comicdom has ever seen, Moon Knight. Moench and Perlin may not have been the original creative team on the title, but they were certainly the greatest.

In addition to the 20 issues of the regular series, the book collects four issues of "Giant-Sized Werewolf" and an issue of "Marvel Premiere". The one thing these additions have in common is that they are the weakest points of the book, not only disrupting the flow of the main story as you read the collection, with forced meetings between the Werewolf and other Marvel horror characters (like Frankenstein's Monster and Mobius the Living Vampire) and stories that just aren't as interesting as the ones in the main title. The exception is the tale from "Giant-Sized Werewolf #3" which reintroduces characters and story elements last seen around the middle of "Essential Werewolf By Night, Vol. 1" and starts a ball rolling that eventually brings us to some of the most effective of Marvel's horror tales.

Basically, as was the case with most of Marvel's horror characters, "Werewolf By Night" was at its best when it stood apart from the greater Marvel Universe. Most cross-overs simply didn't work, including those featuring other horror characters, such as Frankenstein's Monster.

Superhero flair and classic/exploitation horror aren't easy to mix--as my comments regarding the "Giant-Sized Werewolf" reprints implies--but Moench and Perlin tried it with "Werewolf By Night" as the last dozen or so issues of the title moved steadily in a more traditional Marvel direction, with Jack Russell gaining control of his transformations and even coming up against Iron Man in the final issue. But, as Moench and Perlin worked to transition the title, they gave us some of the most effective horror stories Marvel ever published. 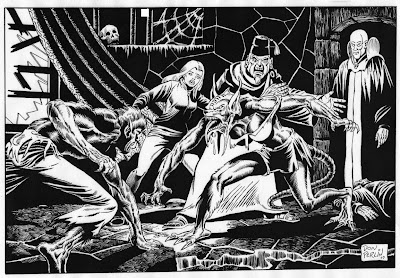 In their efforts to tie up Jack Russell's horror past, the werewolf first savagely mauled Jack's best friend, Jack's sister is transformed into a hideous monster when a villain triggers the dormant werewolf within her; long-time supporting cast members Taboo and Topaz return during a show-down with the downright Lovecraftian villain Glitternight; Brother Voodoo shows up to help put Jack's legal problems behind him in one of the most effective appearances of that inherently goofy character ever, a final showdown takes place against the downright Lovecraftian villain Glitternight; and Jack and friends are trapped in a haunted house where the title manages to surpass even the horrific Tom Sutton-illustrated Tatterdaemallion stories of Volume One.

But, as excellent as these stories were, the Marvel Age of Monsters was over. As the 1970s came to a close, so did Werewolf By Night. However, it ended on a very strong note, and the two volumes collecting all the early stories of Marvel Comics' reluctant werewolf are worthy of attention from comics and horror fans alike.