'The Moth' is not worth catching

Wild-child heiress Diane Wyman (O'Neil) loses her fortune when her guardian (Lucas) invokes a morality clause in her father's will following one media scandal too many. The lecherous old man helped engineered the scandal, hoping to force her completely under his power, but she runs off to New Orleans, where she naively falls in with a pair of jewel thieves (Dagget and Renaldo). The thieves pretend to be her friends, but they are just setting her up to take the fall for their latest heist and make a detective who has pursued them from New York that the disgraced socialite is actually the mysterious jewel thief known as "The Moth." Will George (Page), the handsome engineer who has become infatuated with her, manage to save Diane from the many sinister forces arrayed against her?

"The Moth" is an almost inappropriately light-hearted movie, given the fairly vile characters that are set to destroy the naive young woman who is its focal character, be it the dirty old man who is supposed to be looking out for her best interests but really just wants to possess her; or the cold-hearted thieves, who take advantage of her to cover their escape. Of course, given that it's so sloppily written movie that relies on coincidence after coincidence to keep the plot going, fails to be funny in most places where it's supposed to be, and the straight-forwardness of the plot makes the build-up of suspense nearly non-existent, it's hard to tell if its creators failed to make a drama or created one of the least funny comedies ever made.

The film is especially unfunny in the sense that the disgusting character who is Diane's guardian is supposed to be comic relief, and the screen writers and director blow both their key moments of suspense--when it looks like Diane is going to be caught with the stolen jewels, and when one of the thieves wants to turn to murder to insure his get-away--by introducing the threats and disposing of them before the audience even has time to grow concerned about them. It's rare to find a movie as brief as this one where the pacing is off, but that is the major flaw here.

Another flaw is the directing and the acting, both of which were more suitable to the silent movies where the director and much of the cast got their starts. While it's easy to see why the very pretty Sally O'Neil was a big star, it's equally easy to understand why she couldn't make a successful transition to the talkies. While she had charisma and beauty, she had an acting style more suitable for theatre or the always larger-than-life pantomimes needed to convey action and emotion in silent films. By 1937, her screen career was over, and O'Neil returned to theatre where her career had started.

Despite my criticism of her performance, O'Neil and her character of Diane Wyman are the only thing that makes this movie worth watching. She is by far the most interesting performer in the film, and even the most cynical viewer will want this likable, if none-to-bright, character to somehow recognize that the only person around who cares at all for her well-being is George, the one person she keeps pushing away and abusing. 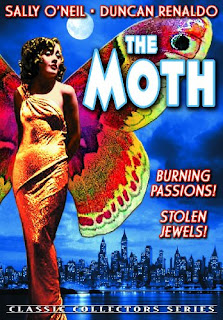 Still, this is not a movie that's really worth seeking out. It's one of those films that's been from oblivion and once again put in front of the public by the advent of digital media and the relative ease of manufacturing DVDs, but unlike so many hidden treasures found in the Alpha Video catalogue, I doubt anyone would have missed "The Moth" had vanished forever. (Although I must congratulate the art department at Alpha Video for coming up with a cover design far more interesting than the movie; it was the cover alone that prompted me to buy the disc. It's got nothing at all to do with the movie, but it's pretty cool... almost like the days of the exploitation films where the crappier the movie, the more exciting the poster. The Roger Corman Marketing Team Spirit is alive and well in DVD Land!)