'The Ghost Ship' is an offbeat thriller

During the 1940s, producer Val Lewton made a string of landmark horror films for RKO, films with humble origins--he was given small budgets, titles picked in advance by the marketing people, and in many cases additional requirements that he had use certain specific standing sets. Yet, it was in these movies that many of the tricks that horror filmmakers still use to this very day were either first used or perfected. And while Lewton didn't actually direct any of the films, those who did credit him with defining the style and their trail-blazing filmmaking vocabulary.

With "The Ghost Ship," Lewton was given the task to make a horror movie using a ship set left over from the 1938 production "Pacific Liner". As was typical, he more than rose to the task and created a psychological thriller dripping with atmosphere and that keeps viewers guessing about the outcome until the very end. It also features moments of horror that few (if any) directors and producers will never be able to get up on the screen even in their wildest dreams.

In "Ghost Ship", young Tom Merriam (Wade) signs on as third officer of the Altair, a ship under the command of the respected and well-known Captain Stone (Dix). Tom quickly realizes that Stone is gradually going insane, becoming obsessed with power and believing the crew is plotting against him. He tries to call the attention of his fellow officers to this fact, but their loyalty to the captain blinds them to his growing and evermore dangerous eccentricities. Tom finds himself the target of the captain's deadly resentment, but manages to end his contract and leave the ship, safely escaping his clutches. Or so he thinks... as a series of misunderstandings places him right back on the Altair as it leaves for an extended cruise. A cruise that Tom is not likely to survive. 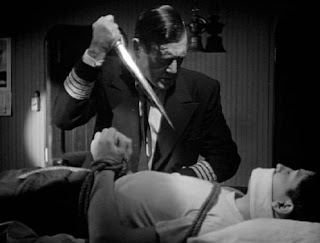 Simple both in story and execution, "Ghost Ship" is nonetheless a tense, character-driven thriller that keeps viewers engaged by placing its sympathetic and reluctant hero at the mercy of a madman that no one but he recognizes for what he is. Further, by demonstrating the homicidal nature of Captain Stone in a couple of very well-staged scenes of horror--the foremost of these being the one where Stone locks a crewman in the housing for the anchor chain as the anchor is being lifted--director Mark Robson makes it seem more than likely that Tom won't live as far as the end credits.

Of course, the tight script and moody cinematography wouldn't have seemed half as effective if the cast hasn't been so good. Russell Wade is a bit bland, but he works well in the part of the earnest officer who finds his idealism crashing headlong into a nightmare, while Richard Dix is almost brilliant in the part of the insane captain, switching from menacing to stern to bat-shit maniacal to coldly rational within short order... and coming across equally convincing in all modes of behavior. Dix's performances makes it absolutely plausible that Stone's insanity could go completely unnoticed by everyone else in his life and under his command, and this is what makes the movie so very scary.

Six decades after it was made, "Ghost Ship" remains a film that would-be makers of horror movies and thrillers should be forced to study and write 2,000 word essays on... especially if their last names are Argento, Zombie, or De Palma. Maybe their film-craft would improve.

Has anyone out there seen "Ghost Ship"? What do you think is the scariest moment in the film? For me, it's the life-and-death struggle during the climax that happens mere feet from a group of unaware sailors happily singing Calypso music.


Interesting Fact: Shortly after the release of "Ghost Ship", a pair of play-wrights claimed Val Lewton had stolen their story and took Lewton and RKO to court. Although an out-of-court settlement offer was made, Lewton didn't want the accusation of him being plagerist hanging out there, so he insisted the case go to trail. The courts found against Lewton and RKO, and the film was was withdrawn from distribution. It was not seen again by the public for over 50 years.
Posted by Steve Miller at 12:02 AM