'The Giant Claw' is attached to a fun turkey

An electrical engineer who happens to be dabble in molecular physics on the side (Morrow) and his mathematician Girl Friday (Corday) work with the United States military to find a way to defeat an invulnerable giant anti-matter bird from outer space that has come to Earth to nest (and eat planes, trains, the United Nations Building, and joyriding teenagers). 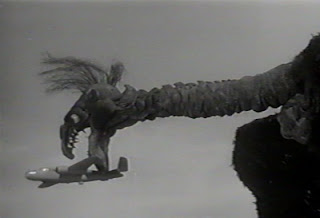 "The Giant Claw" is a film that demonstrates that the cheesy science fiction movie hasn't changed in 50 years. I'll leave it up to you to decide if that means this film was ahead of its time, or if it means we should be sad over the state of the art of the genre film. Me, I enjoyed this movie the same way I enjoy the goofy monster films that appear on Sci-Fi Channel during "the most dangerous night of television."

The pacing, tone, and quality of acting of this movie is almost identical to "Monster Ark", a Sci-Fi Channel Original Picture that I saw a while back. Heck, the monsters in the two films are equally goofy looking and they're both animated through the cheapest possible effects of the day. (The alien buzzard in "The Giant Claw" is a marionette attacking miniatures, while the creature in "Monster Ark" is a CGI creature of dubious quality attacking similarly dubiously animated targets or actors performing with bad gore effects.)

If you've enjoyed any of the Sci-Fi Channel's monster movies, you should also give this film a try. Even if you haven't, it's worth a look if your monster movie viewing experience isn't ruined by a little silliness. Unlike many 1950s low-budget monster movies, "The Giant Claw" wastes no time getting started and it keeps going at a fast clip for its entire 76-minute running time.

As silly as the giant space buzzard looks, the crunching sounds as it eats the crew of a plane who attempted to parachute to safety and the anti-matter death-from-above it visits upon a carload of teenagers are actually some pretty good monster movie moments by any standard. Jeff Morrow and Mara Corday also make a good on-screen team.

Check out "The Giant Claw". At the very least, slate it for inclusion in a Bad Movie Night line-up. It's almost tailor-made for such an event!