'The Elongated Man' is good in small doses

"DC Showcase Presents: The Elongated Man" is another huge (500+ pages) low-cost reprint book presenting classic DC Comics stories in black-and-white. This one features the early appearances of the Elongated Man, collection stories from issues of "The Flash" (where the character debuted as a curious superhero competitor to the Fastest Man Alive) and "Detective Comics" were he headlined his own back-up strip. 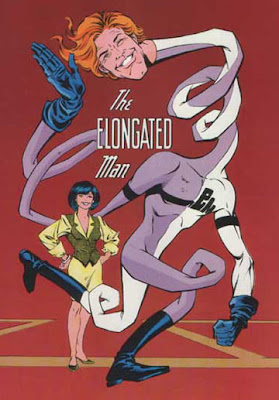 The Elongated Man is a chemist and amateur detective named Ralph Dibny who gains the power to stretch his body in impossible ways by drinking his own hyper-concentrated variant of a substance sideshow contortionists use to stay limber, Gingold juice. Always hungry for attention, Ralph swiftly gave up on the notion of keeping his identity secret, and one interesting point about the series is that this was the first superhero in the DC stable to dispense with the double-identity mainstay of the genre. He was also the first DC superhero to marry his love interest, Sue.

Aside from a few team-ups with Flash and Kid Flash, the book focuses on Ralph and Sue traveling around the world, enjoying the care-free status of the independently wealthy and solving bizarre mysteries where-ever they go. Not only does Ralph have a bizarre superpower which he uses in bizarre ways--such as elongating his kneecap to smack a thug in the face--but he appears to be a weirdness magnet. Sue, serving as a sort of reader surrogate at times, observes on more than one occasion on how they can't go anywhere without Ralph's mystery-sniffing nose starting to twitch (literally).

Aside from the Flash (and his associated supporting cast), the Elongated Man stories have no recurring characters aside from Ralph and Sue. While that's partly because these are stories that focus far more on gimmicks than character--more on that below--the relationship between the two is about as ideal a marriage that I think has been presented anywhere else in American comics, free of the usual soap operatic twists and turns that haunted Reed & Sue Richards and Barry & Iris Allen over the years. Discounting odd occurrences like Sue's mind being transplanted into the body of a French con-artist and visa-versa, the Dibny never marriage suffered any challenges or stresses more severe than the usual arguments any couple will get into now and then. It's an aspect I believe mature readers--as in adults--will find appealing. 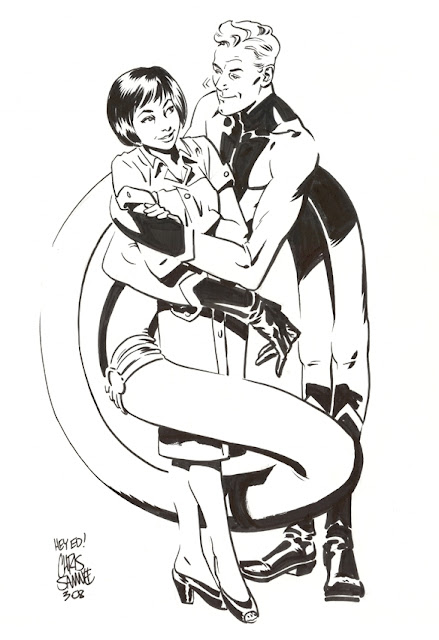 But there are many more aspects of the book that adults will have a far harder time appreciating, as the stories within its pages are definitely written for children,or those very young at heart. The mysteries that the Elongated Man investigates usually have solutions so bizarre that they're the sort of thing I believe only a kid can fully appreciate; if you've ever listened to kids make up stories while playing with their Legos or action figures or dolls, you know exactly what I mean. In fact, the most impressive thing about this collection of stories is the ability that writers Fox and Broome have to get in touch with their inner children. Most writers--including myself, I fear--would say "Nah, that's too silly... I can't possibly write that."

The silliness Elongated Man's adventures were of course part-and-parcel with many of the Julie Schwartz-helmed titles from the 1960s--be they ones featuring Batman or the Flash--but it is extra-concentrated here. So much so that it becomes too much if you read more than two or three of them in a row, or so it was for the 40+ year-old me. I think adults can better appreciate the material here in small doses, even if I am certain that a kid could probably devour the entire book in one or two sittings.

What I never got enough of, however, was the fantastic Carmine Infantino art that graces the first 450 pages of the book without interruption. Infantino's highly stylized artwork is perfect for showcasing the odd nature of Ralph Dibny's powers, as well as for capturing the lighthearted feel of the adventures he has with wife Sue. In fact, the 100 or so pages where readers get the rare treat of seeing Infantino ink his own pencils should be counted among the best work he did during the 1960s.

By way of contrast, stories illustrated in a more naturalistic fashion late in the book, by Neal Adams and Irv Novick fall flat, because they lack that surrealistic feel that Infantino brings to the tales; it's an interesting dichotomy that an artist noted for a knack for giving even round objects sharp edges would be the absolutely right person to illustrate a series about a man who is infinitely fluid.

Trivia: Editor Julie Schwartz, co-creator of the Elongated Man, stated that if he had been aware that DC Comics acquired the rights to Golden Age character Plastic Man in the mid-1950s, he never would have bothered with inventing a new character.
Posted by Steve Miller at 8:08 AM