This is the last Monday of 2010, and the last of the weekly Mohammed Mondays. This feature will go to a whenever-the-mood-strikes-me --not because I care about offending Muslim Maniacs, and over-sensitives paranoiacs prone to hysterics, but because I have better things to do with my time than search for suitable cartoons of the Prophet Mohammed (may pizza be upon him).

Speaking of priorities, that's the subject of today's cartoon by Jennifer Armstrong. 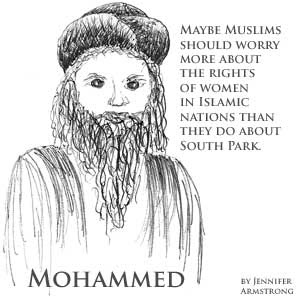 This cartoon originally appeared here, in a post that also serves as a nice background piece on why Mohammed Monday exists. (The final trigger was the fact that Islamic terrorists forced Molly Norris to change her name and go underground.)
Posted by Steve Miller at 12:01 AM