Mohammed Monday:
What Would Mohammed Drive?

In December of 2002, editorial cartoonist Doug Marlette answered the question "What would Mohammed drive?" with the following cartoon: 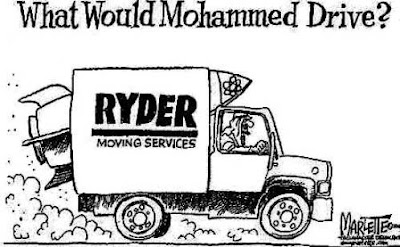 He got the usual threats of murder and mutilation from Mohammed death cultists and other followers of the Religion of Peace.

It's interesting how the idolators of the Prophet Mohammed (may peaches be upon him) automatically assumed that the cartoon referred to the Prophet Mohammed (may peas be upon him). Why would they have such an idea? There were no Ryder trucks or missiles in the day of their beloved and most perfect Prophet. And there are all sorts of guys named Mohammed who want to murder people.

Take for example Mohamed O. Mohamud, devout Muslim (according to his friends) and typical Lion of Islam slacker terrorist/mass-murderer wanna-be. In November 2010, Mohmamud provided his own answer to the question "what would Mohamed drive?" and it's the same that the cartoonist came up with. Does this mean that Mohamed O. Muhamud is a Prophet? Or does it mean he is like unto the Prophet Mohammed (may pleats be upon him), carrying on as he would and as he commands in the Most Holy Koran?

The lesson here is that the idolators (and perhaps even the "faithful Muslims") seem to know exactly what Mohammed would drive, whether it be the Prophet Mohammed (may peat be upon him) or Mohamed O. Mohamud, the MOM of all Mohammedans!

In fairness, at least one Imam disavowed Mohamed O. Mohamud, so I suppose this means there is at least ONE Muslim who is peaceful. This also indicates that he is smarter than a lot of Oregonians, many of whom seemed to blame the FBI for MOM's murderous intentions.

(The Mohammed Mondays series will continue on a weekly basis through the end of the year, after which it will become a bi-weekly feature. Submissions are welcomed. Click here for links to background and details.)