'She-Wolf of London' is a disappointment

Young heiress Phyllis Allenby (Lockhart) comes to fear that she has fallen victim to a family curse and has begun committing grisly murders in a nearby park. Her fiance (Porter) sets about to prove her fears wrong by finding the real killer. 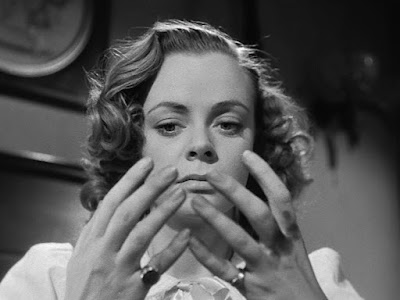 "She-Wolf of London" is a slightly lethargic thriller that's more of a mystery than a monster movie, despite the title. It could be that this is a movie that's become predictable given the hundreds of similar films that have been made since its release in 1946, but I pretty much knew how it was going to resolve some five-ten minutes in, as well the true reason for the Allenby curse's return.

Usually, I don't mind being right about guessing where a film is heading before it gets there, particuarly when the filmmmakers throw in some nice bits of misdirection that make me suspect I'm wrong... and the actions of Phyllis's insensitive friend Carol (Wiley) were so well orchestrated that they made me do just that--could she REALLY be that much of a bitch without trying, I had to ask myself? Unfortunately, in the case of this movie, when it does arrive at the ending I had already guessed, it completely botches it. Setting up Carol as a possibility for the she-wolf was really the only decent bit of storytelling here, everything else being very pedestrian and the ending being a suspenseless, badly written and badly staged cop-out.

I wish more effort and care had been put into giving "She-Wolf of London" a better ending. I became very interested in the film about halfway through when I realized that its storyline was very close to what the 1941 classic "The Wolf Man" (review here ) was originally supposed to be--a psychological thriller where the "werewolf" might just be a deluded psychopath whose "transformation" is a figment of a diseased mind--and this concept could have been put to far better use than it is here. I might have felt the letdown of the poorly executed ending more sharply because I got my hopes up for what was coming, but I suspect it's more likely the pathetic ending is simply the natural outcome of a production where quality wasn't a top priority. After all, this is a film set in 1890s London, with lead characters who are all British bluebloods, but none of the stars make even a halfhearted attempt at a British accent.

In the final analysis, this is a shoddy movie that is very solidly deserving of the 4/10 rating I'm giving it.