Read the Review, Watch the Movie: 'Seven Footprints to Satan'

The subject of the following review was released to movie theaters exactly 90 years ago today! (The Year of the Hot Toddy is truly a year of happy coincidences. When I initially chose this movie from among the many Thelma Todd-featuring films I'll be writing about during 2019, to watch at this point, I didn't realize I would have the opportunity to post the review to coincide with such an anniversary!)

While he is deep in the throes of a midlife crisis (Hale) and his girlfriend (Todd) are find themselves victims of a kidnapping during an elaborate heist at an exclusive  art auction... and then things go from bad to nightmarish. 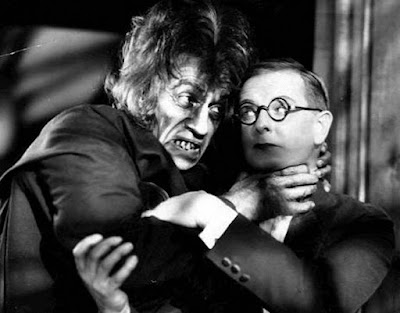 "Seven Footsteps to Satan" is one of those films that's hard to review without spoiling it. I think it really works best if you come to it cold, not knowing really what to expect... because the impact of the film revealing what it's really about and begins to spiral into fantastic and creepy weirdness is all the greater. (You THINK you're watching a crime drama, but then....)

With that in mind, all I can say about the film is that in addition to an impressive, fast-moving and twist-laden storyline, the film sports creative camera work and editing (I especially like the way wipes are used), spectacularly elaborate sets, elegant costumes (mostly evening gowns and tuxes but the other outfits that show up are really neat), excellent monster make-up jobs, and some really fine acting from the principals in the cast.

I thought the performance by star Creighton Hale, who, once again, is a bespecled and unlikely hero, was excellent. Unlike the comedic character he played in "The Cat and the Canary", here he's quite competent and extremely brave at every turn. Actress Thelma Todd, also impresses, showing that she was as good a dramatic actress as she was a comedienne. 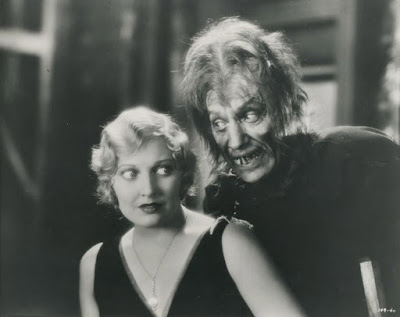 By the way, The film has a very large supporting cast (so large, in fact, that it sometimes feels like costar Todd is just another face in the  crowd), but among them we have Loretta Young standing out with a memorable performance in one of the film's most intense and frightening scenes, and an honest-to-god Asian actor playing a sinister Oriental Mystice, Sojin Kamiyama. (Maybe someone forgot to tell the Danish director that he should use white guys in make-up for the Asian characters.)

"Seven Footprints to Satan" was one of three silent thrillers/horror films directed by Benjamin Christensen for American studios, and until just a few years ago, it was believed to be lost. Now, however, several versions are available to watch online. None are of stellar quality, but given how many of these great old movies are gone forever (or hard to access because they've not yet been digitized and released online or on DVD), lovers of this sort of material are lucky we're getting this much.

If you like silent movies, especially ones of the more "trippy" variety, you need to watch "Seven Footprints to Satan". I highly recommend the version I've embedded below: It's the complete film, it's it was digitized from filmstock that was in relatively good shape, and it features an all-new, modern musical score that adds greatly to the experience.