That strange sound? That's Nancy Reagan spinning in her grave!

Eccentric detective Coke Ennyday (Fairbanks) turns his drug-fueled genius toward stopping the predations of a fabulously wealthy criminal mastermind (Sears). Along the way, he and a beautiful young woman (Love) take turns saving each other's lives at the sea-shore and romance blossoms... but the villain has plans for Coke's new sweetheart. 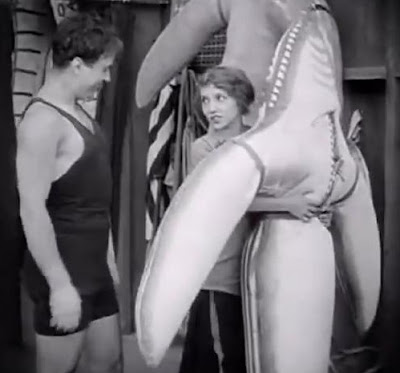 As their stars were rising, Douglas Fairbanks and Bessie Love appeared together in a number of films, the wildest of which is almost certainly "The Mystery of the Leaping Fish". While I haven't watched any of the others, but I think I can safely make that assumption, because "wild" is joined with "weird" and "subversive" when one is looking for words to be describe this film.

"The Mystery of the Leaping Fish" is a cartoonish spoof of Sherlock Holmes with an extreme degree of attention paid to Holmes' drug habits. Some of the film's humor is lost through the passage of time, because the exaggerated degree to which Coke Ennyday uses drugs is, according to one commentator, mocking a stage adaptation of Holmes that was well-known and very popular at the time and which had left out all drug references. The vast majority of the drug humor is so over-the-top, however,  that it is as funny and ridiculous now as it was when this film was first released 100 years and will be 100 years from today. Coke Ennyday spends the entire movie buzzing around, high as a kite... and his solution to any obstacle is to inject, snort, or otherwise consume more and more drugs. And it works.

This is Douglas Fairbanks' movie. From the first moment until the end, everything is driven by his insane antics--which get even more insane once he breaks out the comedic Sherlock Holmes outfit. This, being a silent movie, the gags are almost entirely visual, although a few are augmented by intertiles or labels on items, as well as puns like the business that serves as the front for the villain's drug distribution network being named Sum Hop Laundry. While co-star Bessie Love and the lead villain, played by Alan Sears, get some funny scenes together or of their own--mostly revolving around poking fun at the melodramatic conventions of silent movies--and they show themselves to be talented and charismatic performers in these scenes, viewers will be counting the seconds for Fairbanks' unrestrained energy and craziness to return to the screen. (As tempting as it is for me to relay some of the greatest gags in the film by way of enticing people to watch it, doing so would spoil their impact... all I can say is that this is a film that has be experienced cold.)

Although it's over 100 years old, "The Mystery of the Leaping Fish" is wilder and "edgier" than many contemporary works. If anything, it's gotten even more risque, what with the "drugs are bad mmmmkay?" messaging of recent decades and several of the conventional plot devices and characters it mocks are the sort of thing that sends certain people running for the fainting couch while clutching their pearls, or for their keyboards to post angrily hysterical messages to social media and blog comment sections. I think those who appreciate absurdist, subversive humor will enjoy the heck out of this movie, even if they don't usually like silent films. The showdown between the drug-crazed, syringe wielding Coke Ennyday and the villains at the Sum Hop Laundry is something any lover of comedies needs to see at least once in their lives! (The sequence where Bessie Love's damsel in distress essentially rescues herself is also a silent movie satirical gold.) 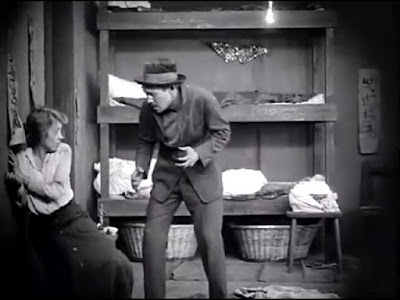 There are several different versions of "The Mystery of the Leaping Fish" that can be viewed for free on YouTube and certain streaming services. You can even watch it right now, and I hope you'll let me know with a comment if I steered you right or wrong! (I chose this particular version because I like the music.)


Trivia: A not so funny coincidence/factoid is that Alma Ruben (who plays the villain's female sidekick) was, like Fairbanks and Love, a rising Hollywood star at the time this film was made. In fact, she was more famous than Love at the time... but by 1925, Ruben's life and career was ruined by drug abuse. She died in 1931 from ailments related to her addictions.
Posted by Steve Miller at 10:45 PM