Abbott and Costello vs the Alien Amazons!

When two workmen (Abbott and Costello) accidentally launch with an experimental space rocket, they think they end up on Mars. The truth is, they end up places far stranger than Mars... New Orleans during Mardi Gras and then Venus, a planet governed by immortal Amazons. 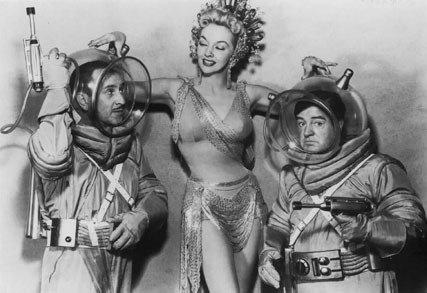 As my summary above states, Abbott and Costello never get to Mars in this film, despite the intentions of the builders of the top secret rocket and the movie's title. Instead, they move through a thin plot that is stretched to the breaking point to fill the movie's 77-minute running time, and every joke is beaten to death, particularly during the New Orleans segment. Things pick up a bit when the action moves to Venus (where Costello is made King), but it's only a slight improvement. I'm not even sure if it's the distraction of all the scantily clad beauty queens that tricked me into thinking the film got better.

This is one of the weakest Abbott & Costello pictures, and everyone but truly hardcore fans of their work should probably not bother with it.