'Night of the Blood Beast' had
promising script, but not much else

Things go from bad to worse for the scientists at an isolated observation post maintained by the US space program. First, they have the sad duty of recovering the body of an astronaut(Emmet) from the wreckage of a crashed experimental spacecraft (which they helped design). Then, they find themselves cut off from the rest of the world by a mysterious magnetic disturbance. But when the dead astronaut is restored to life by alien microbes that are breeding in his bloodstream, things are at their lowest. Well, until the parent alien shows up to check on its incubator and engage in some murderous mayhem. 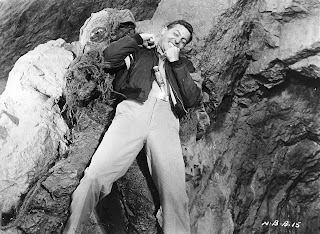 "Night of the Blood Beast" has all the makings of a truly fun sci-if horror movie. It's a film that could due with a remake by a talented filmmaker with a good cast, as it could be lots of gory fun. "Evil Dead" but with aliens is the possibility that is lurking within this film.

However, what presently exists is this movie, something that's barely worth watching. While it's a fine example of how to make a film with very little money--small cast, limited sets and locations--but also of how editing can ruin a movie. Although it only runs 62 minutes, "Night of the Blood Beast" seems far longer than that, because nearly every bit of dialogue is punctuated with a pause, almost every scene runs longer than it needs to, and whenever the characters venture outside in search of the creature menacing them, it's like we get to see their entire two-mile hikes.

Of course, this could be the fault of the director rather than the editor. Bernard L. Kowalski also directed the slow-moving, almost-as-boring "Attack of the Giant Leeches" (review here). Like that other movie, this one has some nice moments--such as when our heroes return to the lab to find one of their number suspended from the ceiling with his head missing--but most of the movie is just a little too slow to be interesting.

It is, however, a near-perfect vehicle for a "Mystery Science Theater 3000"-type bash-fest if you and your friends are into that sort of thing. The cheap sets and effects, the goofy monster costume, the agenda and methods of the would-be alien overlord, the interactions between the characters, and, just as importantly, the many pauses so-pregnant-we-may-need-to-deliver-the-next-line-by-C-section, are all ripe breeding ground for witty and caustic commentary. (I'd be surprised if this film wasn't featured on the MST3K show.)