A group of obnoxious scientiest and their boorish, wealthy patron hop in their nifty drilling, amphibeous under-earth ATV--the Cyclotram!--to explore deep underground, hoping to find a place where humankind can retreat to in case of a nuclear disaster. 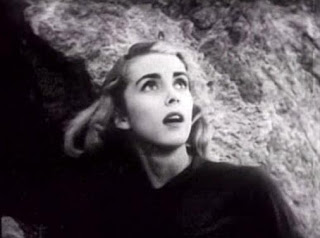 Never has so little happened during a "let's go looking for the underground world"-type movie. I think I can safely say that, despite the high bodycount among expedition members, the enterprise undertaken by the characters in "Unknown World" is the least eventful, most uninteresting, and ultimately pointles journey to "inner-earth" that any fictional characters have ever undertaken.

There's no much here, exept a slighly more scientific take on what explorers might find deep underground--as in, no monsters, no nubile, scantily clad queens of Atlantis, no nothing. And, frankly, if you're going to make a movie about guys drilling their way to the center of the Earth, you better damn well give me some monsters and nubile barbarian queens at the far end! ("The Core" would have been better if there had been babes in loinclothes and little else at the end of that trip, too.)