'Revolt of the Zombies' is a non-event 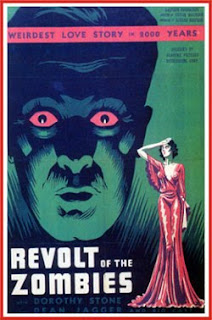 At the height of World War I, a French officer (Jagger) brings to his generals the ultimate weapon: the secret to creating impervious zombie soldiers! Unfortunately, before the Cambodian monk can be made to share this secret with the Europeans, he is murdered by a sinister enemy agent. A military expedition is sent to the darkest heart of Cambodia's jungles to see if the secret can be recovered.

"Revolt of the Zombies" actually has a really interesting plot at its heart. Too bad the filmmakers completely botched this movie, with awful dialogue and pacing that is at once too slow and too fast--important events happen off-screen and are then relayed to the viewers by the characters in boring exposition. Worse, the movie ultimately chickens out in regards to both its use of zombies in the story AND in regards to what seemed to have been its message about the negative impact of European colonialism with an "absolute power corrupts absolutely." What's more... there ain't no damn zombie revolt in the film (but that's because there aren't any real zombies, either).

I probably would have shrugged my shoulders at this one--it's just another low-budget, crappy horror film--but it was made as a follow-up to the fabulous "White Zombie." I expected more of "Revolt of the Zombies" because "White Zombie" is a dyed-in-the-wool classic horror film, one of the best zombie movies ever made (and perhaps even the *first* zombie movie ever made), and it was as low-budget as "Revolt."


Click here to read my review of "White Zombie" at The Bela Lugosi Collection.
Posted by Steve Miller at 6:03 PM