Just as it appears Hugh Drummond (Howard) and Phyllis Clalvering (Angel) are finally going to make it to their own wedding, a cooky historian (Harvey) shows up on the doorstep and says he comes to search for a massive treasure hidden in the catacombs below the Drummond family's ancestral home. A treasure hunt isn't enough to disrupt the wedding plans--Drummond thinks that can wait until the day after he and Clavering married--but the murder of the historian is. Drummond, his friend Algy (Denny), his faithful servant Tenny (Clive), house-guest Colonel Nielsen of Scotland Yard (Warner), and even Miss Clavering are soon searching the long-abandoned tunnels in search of a treasure and a deadly killer. But it's a deadly hunt, because the killer is one step ahead of them. 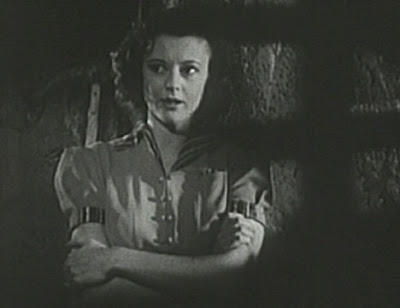 "Bulldog Drummond's Secret Police" is another strong entry in the series. The physical humor is strong in this one, and the action is fast-moving, entertaining, and downright suspenseful at times. In fact, there's a scene where several of our heroes are in ancient death trap and it actually feels like they might not escape.

The regular cast is excellent as usual, and they have Reginald Denny is funnier in this installment than he as ever been before, and Clive gets some excellent zingers off as well, with Tenny's signature "I rather like it" line being used to great effect on multiple occassions. Howard and Angel once again display excellent on-screen chemistry, and the viewer can easily understand why the two characters keep trying over and over again to get married, despite Fate continuially getting in their way. (In fact, Angel is perhaps the best I've ever seen her in this film--she lights up the screen in every scene she appears in, and she ends up as one of the feistiest "damels in distress" to ever make the bad guy regret taking prisoners.)

To add to the quality, this film can even serve as a jumping-on point for those who don't want to watch from the beginning. As it unfolds, the film manages to give a quick introduction of the characters and the ongoing "Road to the Wedding" subplot that's been running through the series since "Bulldog Drummond Comes Back" without boring those of us who have watched all the previous installments.

As good as it is, this episode is not exactly perfect. First, there is a very annoying, very stupid comic relief character that makes Algy look like a genius. Second, there's a problem with the villain of this episode. He's written in a very sinister fashion, he's got some good lines, and he proves to be a real threat to Our Heroes... but he's played by an actor who's nearly a non-entity compared to the high-energy performers he's surrounded by. Leo Carroll isn't exactly bad, but he's out of his league with the "Bulldog Drummond" ensamble.

I've said it before, and I'll say it again: This series of "Bulldog Drummond" films reminds me more of the "Indiana Jones" series than any other films from the 1930s I've seen. Heck, there's even a death-trap scene in this one that brings part of "Indiana Jones and the Temple of Doom" to mind... and in this installment Drummond and the gang are hunting for a lost treasure in an ancient castle!