It's Spy vs Spy in this Karloff-starring WW2 propaganda film

It's World War I. The German high command dispatches the beautiful master-spy Helene (Lindsay) to London to help the legendary German agent Strengler infiltrate of the very highest levels of the British war ministry. But British Intelligence have uncovered Strengler's ring, and they've inserted a double-agent into it. But which of the German spies is truly loyal to Britain? The milkman? The minister's secretary? Or maybe this is a case where the butler (Karloff) truly can't be trusted? Who will carry the day in the game of spy vs. spy double-crosses? 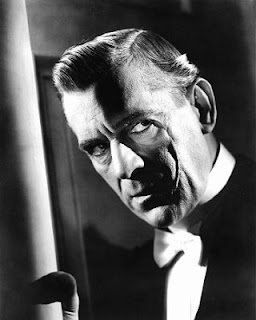 "British Intelligence" is a nice little spy movie with healthy doses of World War II propaganda. Despite its outdated political messages, the film is still fun to watch today for anyone who enjoys spy movies.

The film offers of a steady stream of plot twists and turns as British and German agents and double-agents try to trap and outwit each other. It is is well directed, with fine acting, great lighting and camera work, and no padding whatsoever. The final chase scene through the streets of London as it is being bombed by German zeppelins is very tense and expertly executed.

And, although we might think that Boris Karloff has GOT to be the mysterious master spy Spengler--he's Boris Karloff and the's got that creepy scar--the film is so well-crafted that it proves us wrong time again. Karloff may be creepy in the film, but is he a hero or a villain? The film will almost be an an end before we know for sure!

Still, the film held my interest until the end, and it's a nice little time capsule featuring a tight story and fine performances. It's political message might be dated, but it's still a film that's worth seeing today.