'The Last Mile' is one to avoid

Dick Walters (Phillips) is wrongly convicted of murdering his business partner and just before his execution, he is caught up in a death-house uprising led by "Killer" Mears (Foster). Will Walters survive long enough to learn that he's received a last minute stay of execution? 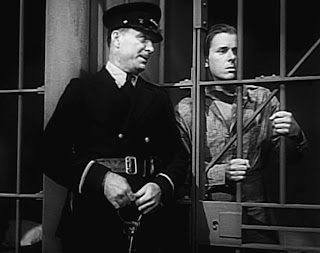 "The Last Mile" is one of those movies that puts the drama in melodrama. Overacted in every conceivable way and showing its roots as a stage play so obviously one wonders why they credited a screenwriter at all, it moves along slowly and predictably. The film also never misses an opportunity to flog its anti-death penalty message, although one wonders why any of the writers thought Mears would make a good spokes-character for the inhumanity of capital punishment. If anything, he's an argument for taking murderers straight from the courthouse to a gas chamber.

I imagine dedicated opponents of capital punishment might find this film a good reaffirmation of their faith, if they can tolerate over-the-top acting from just about the entire cast. As for me, I just found it dull and a little of the mark.