Karloff is up to more than
monkey business in "The Ape"

Disgraced medical researcher turned small town doctor Bernard Adrian (Karloff) has devoted his life to curing the illness that claimed the life of his wife and daughter, and which paralyzed the beautiful young Frances Clifford (Wrixon). After an gorilla from a traveling circus escapes and mauls his keeper, Adrian uses spinal fluid from the dead carnie to devise a treatment for Frances... and her paralysis starts to wane. However, Adrian needs more spinal fluid to complete the cure. If only that ape was around to kill a few more people so he could drain their spines.... 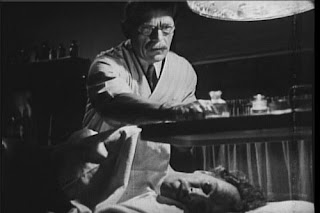 "The Ape" is a film that's carried almost entirely by Boris Karloff, with a tiny bit of help from Wrixon and Hoffman (as his creepy, but devoted, house-keeper). Every other actor is fairly bad, and evey other character is fairly obnoxious and unlikable (except for Henry Hall, who, as the town sheriff is likable enough, but seemingly devoid of acting talent).

Karloff's character is likable and the viewer feels sympathy for him, despite the murderous extremes he goes to in order to find the cure he seeks. He's an underachiever in the mad scientist department, as he is actually motivated on every level by selfless and worthy goals and he's more than willing to work with the medical establishment. He's just a teensy-weensy bit morally challenged.

The biggest flaw with "The Ape", aside from the bad acting by the majority of the supporting players, is the ape. It's another instance of an actor in a laughably bad gorilla suit--hell, it's probably the SAME bad gorilla suit that's been in other films by Monogram Pictures!

On the up side, I've already mentioned Karloff's performance as a character who is both sympathetic and repulsive. Script-wise, the film is blessed with some decent dialogue (even if it's butchered by most of the actors) and it presents a small town where not everyone are closeminded jackasses--even if the majority are--and also a slightly more modern structure than many pictures of the period--it gives us a denoument after the main action is complete.

"The Ape" isn't Karloff's best picture, but it's worth seeing nonetheless. Dr. Adrian may be an underacheiver as far as mad scientists go, but he's one of the more appealing of the bunch.