'As the Earth Turns' was decades in the making

As the Earth Turns (filmed ca. 1937, released 2019)
Starring: Alan Hoelting, Barbara Berger, Edwin C. Frost, and Richard Lyford
Director: Richard Lyford
Rating: Six of Ten Stars
The time is the near future. As war rages across Europe, a mysterious entity, Pax (Lyford), reaches out to world via a west coast U.S. Navy station, threatening natural disasters on a global scale if the war doesn't come to an end. The mysterious entity charges the U.S. government with seeing to it that its demands are carried out... and when peace does not come fast enough, Pax proves that it has the power to destroy mountains, move oceans, and ravage the world with earthquakes. A pair of reporters (Berger and Hoelting) and a physicist (Frost) set out to find Pax and stop his reign of terror. 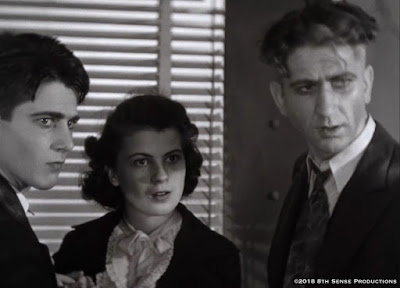 "As the Earth Turns" was made in made in 1937 or 1938, but never released to the public until relatives of its writer/director/co-star connected with composer Ed Hartman. Hartman provided a wall-to-wall musical score for the film and became the driving force in getting it out into the world.
Based on information provided by Hartman and extrapolating from Richard Lyford's IMDB entry, at least one reason why this film was abandoned was that was in final edits and assembly when Lyford went to work for the Walt Disney Corporation, leaving behind his troupe of fellow amateur actors and filmmakers in Seattle, WA, for a career in Hollywood.
On the one hand, it's great that a talented filmmaker had the opportunity to make a living plying his craft--and even co-directing an Oscar-winning documentary--but, on the other hand, it's too bad it took ninty years for this fun sci-fi movie to see the light of day. (That said... if Lyford HAD finished and released his move, there might not have been the well-preserved raw material for Hartman and the restoration team to work with in producing what we now can watch today.)
As far as my purely superficial research has shown, the only person aside from Lyford who went onto a successful show-business career  was Barbara Berger--on Broadway and soap operas--and I think it was well deserved. Aside from Lyford himself, Berger gives the best performance in the cast and is responsible for two of my favorite moments of "As the Earth Turns" (and mentioning either would spoil parts of the movie, sadly).
As for the film itself, story- and pacing-wise is it's on par with the sci-fi films of the time, and the characters are also what you would expect. (Spunky, success-driven girl reporter. Heroic [more or less] male reporter. Wise scientist who happens to be a semi-mentor to one of the characters. Stark-raving mad scientist.) There are a couple of twists to how these standard figures are deployed within the story--one of which is borne from such pure plot convenience that it almost hurt, one which adds a little surprise to the ending. There are plenty of shaky parts in the plot, and the ending comes rather suddenly--but with a bit more of a denouement than many film of the period--but there is nothing worse that you don't see in professionally mounted low-budget films of the day. In fact, what we have here is superior to what you'd find in many of those films. 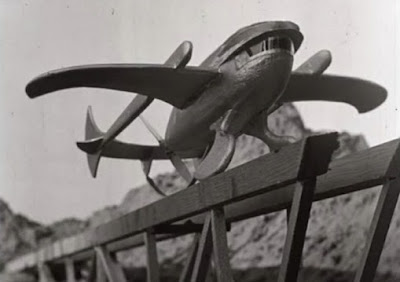 Even more remarkable  are the special effects in this film. They are remarkably competent for an amateur film--from the construction of the models, through the filming of their eventual destruction through explosions and other mayhem. There's a plan crash that's especially impressive--and it compares well to what you might see in films from big studios in the 1950s or even the 1960s.
One curious choice was Lyford's decision to make it a silent movie. Maybe he did so because of technical and resource limitations, because I can't think of many silent movies being produced in 1937. Even cartoons had become more or less dialogue-driven by this point in time, so making a silent film seems a bit odd. (Although since people are still making silent movies today, perhaps I am making a bad assumption. Perhaps Lyford choosing to make a silent film is like someone today choosing to make a sci-fi film using practical effects and models instead of lots of CGI--he had a creative reason for rejecting the most recent technology of filmmaking.
Another curious choice was for Lyford to present the film's final scene in color. Maybe I missed something along the way, but I didn't get the sense that there was anything in the resolution of the story to support such a change--especially given the "throwback" nature of the picture. Maybe the final bit was shot in color because Lyford gained access to a color camera and film and wanted to try it out? (This color portion is among the worst preserved bits of the film... the colors are so faded that this colorblind viewer didn't even see them. A friend who had also watched "As the Earth Turns" asked me what I thought about the film turning color at the end, and my response was, "It turned color?" I thought it was suddenly tinted blue ala some scenes in the silent Fantomas films or "This is the Night" (1932).
Despite some technical gripes and questions I have with the film, I recommend it to anyone who likes early sci-fi pictures and silent movies; you'll find plenty to enjoy here--including the excellent score by Ed Hartman. (More modern composers who try to score silent films should be like Hartman and actually pay attention to what's happening on the screen and match the music accordingly.)
As of this writing, "As the Earth Turns" available for viewing on Amazon Prime.
(Trivia: "As the Earth Turns" star Barbara Berger is remembered primarily for recurring roles on soap operas during the 1960s through the late 1990s. Under the name Barbara Berjer, she made her television debut with appearances in the landmark "The Edge of Night" through "As the World Turns" (funny coincidence there) and ultimately a 12-year stint on "Another World" (1985-1997).