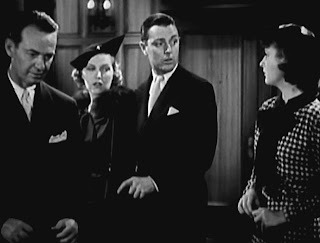 When boxer Gene Harris (Nugent) kills two men in the ring in two fights seperated by a three-year manslaughter stint in the clink, his trainer (Saylor) smells a rat and tries to investigate.

That's not the best summary of "Prison Shadows", but a more detailed one would give away too much of the plot. Unfortunately, that plot is one that will barely make sense to even the most attentive viewer. It's not that it's overly complicated... it's just that it's dumb, with bad guys that are even dumber. (And they're not dumb for comedy... they're just dumb.)

And speaking of dumb. I think the character Gene has got to be one of the most frustrating characters I've ever experienced in a film. The level of obliviousness he shows to the affection that Good Girl Mary Comstock (Barclay) has for him while he carries his torch for Femme Fatale Clair Thomas (Lund) is maddening.I usually don't mind romantic subplots, but this one bugged the heck out of me.

It's a shame the script for this film is so awful, because all the actors are good in their parts--Nugent is perhaps the weakest of the bunch, but I may feel that way due to his bone-headed character more than anything. He wasn't exactly bad... he was just "blah" when compared to everyone else.