'The Phantom of Crestwood' is a dark, gruesome murder mystery

A high-class prostitute, Jenny Wren (Morely), decides to fund her retirement by shaking down five rich and powerful men who have been regular :clients". When one of them murders her rather than submit to blackmail, infamous gangster Gary Curtis (Cortez) must identify the killer before the police arrive and pin it on him. 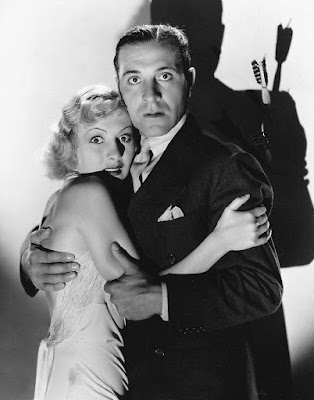 "The Phantom of Crestwood" is a much better movie than its gimmicky origins leads one to believe: It's a film version of a radio-play that ended on a cliffhanger and an invitation for listeners to submit their ideas for who committed the murder. (That makes this film a literal Radio Picture!)

It didn't really matter what listeners submitted, because the entire script was already done--something that was made clear in the contest--but I was still surprised at how dark, gruesome, and adult-oriented the film was, given the way it was promoted. The film is populated almost entirely by shady and unpleasant characters; the murder method is particularly vicious--and the death happens on screen (!); and the closest thing to a hero we have is a coldblooded killer who is only trying to solve the crime so he can save his own neck. It's what I imagine a film by the likes of Quentin Tarintino might have been if he'd been around in 1930s, with its dark nature and lively, non-stop stream of witty dialogue.

If you like your 1930s mysteries on the dark side, I think you'll find the 75-minutes you'll spend watching "The Phantom of Crestwood" to be time very well spent. The performances given by Ricardo Cortez and Karen Moreley almost make watching the film on their own. There's an added bonus in that the mystery surrounding the murder of Jenny Wren is both complex, a little tragic, and makes perfect sense when all the pieces come to light... a combination of elements that aren't often found in these old pictures.