Tom and Jerry are ambulance-chasing attorneys looking for a way to drum up business for their firm. 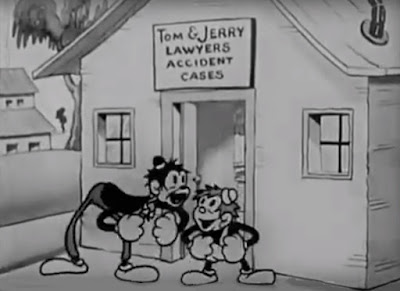 In "Trouble", we see Tom and Jerry making a go at being lawyers, one of the many professions they will work in over the course of the series. Out of their various career choices, this may be the most ill-considered, given they live in a world inhabited by rubbery beings who can transform physically on a whim and who can fall from great heights, get blown up, sink to the bottom of the ocean, and otherwise have disasters happen to them that should be fatal but doesn't leave a scratch or a bruise.

During the six-minute running time of this film, we get to see our heroes sing about their law practice, engage in a clever attempt at guerilla marketing, and literally chase an ambulance when they think they have a lead on a client who is about to fall from the top of the Empire State Building following a botched docking attempt by a zeppelin. The concluding (and funniest) gag is at once a masterful bit of fourth-wall humor, as well as a reinforcement of my opening thought: Accident lawyers in Tom and Jerry's world have a difficult time making a living.

As "Tom and Jerry" cartoons go, this one is pretty mild. The music is fairly unremarkable, the gags mild and, with the exception of the one at the end, predictable. Nothing here is bad... it's just average. (But you can judge for yourself; take a few minutes and watch "Trouble" right now!)

One general thought about most cartoons of this era (late 1920s through the early 1930s) that often occurs to me but I forget to mention when writing these posts, is how they are essentially silent movies. Yes, there's music and singing and sound effects, but what passes for dialogue in minimal and often nothing more than sounds that are word-like but not actual words... or just stay words mixed in with mumbles and squeaks. I wonder how aggressively the studios that produced them pursued foreign markets. While there are unique American cultural and political references in them, it still seems they would have works almost as well in European nations.)
Posted by Steve Miller at 4:44 PM