A sorcerer (Méliès) brings a chalk drawing of a head to life. 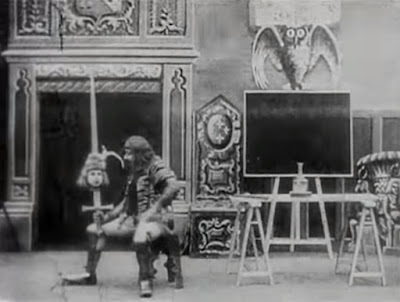 During the earliest days of filmmaking, Frenchman Georges Méliès made dozens upon dozens of short fatasy films that pioneered cinematic special effects. Some have plotlines and tell weird, phantasmagorical stories, while others are created for no reason other than to show off trick photography.

"The Mysterious Knight" is in this latter category. While most 21st Century viewers may not be "wow'ed" by this little film, the straightforward, exuberant presentation makes it a joy to watch. My favorite part of the film are the transformations of the head, as well as the way the character "proves" to us that it really is a disembodied head.

But don't just take my word for it. Why don't you brighten your day and take a minute to check out "The Mysterious Knight", right now from this post?