'Babes in the Goods' doesn't quite deliver

A pair of sales clerks (Todd and Kelly) are pressed into service by their boss (Barty) to demonstrate home appliances in the department store's display window and ordered to keep doing it until all spectators are gone. Unfortunately for them, they gain the adoring attention of a drunk (Housman) who refuses to leave... 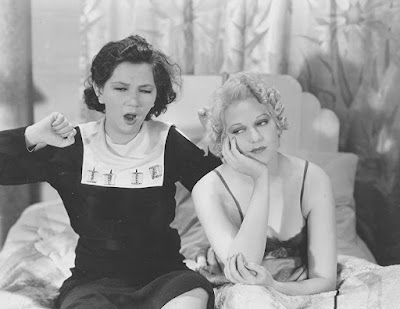 "Babes in the Goods" is another somewhat disappointing entry in the Thelma Todd and Patsy Kelly series of short-form comedies. It has a nice idea at its core--shop-workers getting locked in a window display that's set up like rooms in a house--but what it does with that idea just isn't very funny. Todd and Kelly are as good as they've ever been--with Kelly being better, because she is a little more restrained here than she has been in previous films--but they can only do so much with the material they were given to work with. It's really a shame, because they're actually the main focus of the picture, unlike in some of these shorts where there's so much going on that Todd and Kelly (or Pitts, in those where she was the co-star) are crowded out of their own story.

The film is at its funniest when Arthur Housman is doing his drunk routine, especially when reacting to poor Thelma and Patsy in the window (with the bit where he sees Thelma undress in silhouette and then interact with a mannequin being the peak).

"Babes in the Goods" is one of the short films included in the Complete Hal Roach Thelma Todd & Patsy Kelly DVD collection.