Thelma (Todd) gets her brash girlfriend, Patsy (Kelly), a job as an air hostess at the same company she works for. Their first assignment together is on a plane where an experimental parachute emergency system is to be tested. It perhaps goes without saying, but things go wrong... 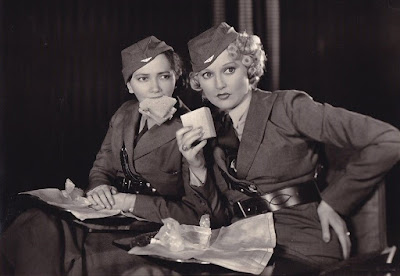 "Air Fright" was the third film that Thelma Todd and Patsy Kelly made together, and it was the best up to this point. The script is the strongest yet, the humor works for the most part, Patsy Kelly's character is more hapless and a fish-out-of-water than annoying and stupid (as she was in "Beauty and the Bus"). There was even some comedic action and suspense mixed in when our heroines end up dangling from the airplane in a tangled parachute.

Although an improvement on the previous films featuring Todd and Kelly, when things didn't work here, they really didn't work. Kelly delivers a number of one-liners that flop to the ground harder than someone jumping from a plane without a parachute, and, once again, the film's pacing is off to the point where the ending feels like the last few minutes of the picture may be missing.

It should be noted that this is basically Patsy Kelly's picture. Todd basically plays the straight man while she fires off jokes and causes chaos; it's said that Hal Roach was shooting for a Laurel & Hardy vibe, but with women when it came to these pictures, but here Todd & Kelly come off like a Abbott & Costello-type team... but without Todd being the sort of jerk toward Kelly that Abbott so often was to Costello in their pictures. I point this out, because, although I enjoyed Kelly in the film, I understand that she has her detractors. Those who can't stand Kelly, but who still want to enjoy Todd--who is once again fun to watch, even if she doesn't get to stretch her comedic muscles much--may want to save this film until they have nothing else to watch.

"Air Fright" is one of 21 short films that Todd and Kelly made together, and it can be found included in the three DVD set The Complete Hal Roach Thelma Todd & Patsy Kelly Collection.