'Werewolf By Night' is one of Marvel's best

"Essential Werewolf By Night, Vol 1" presents 500 pages from a series that ranks among Marvel's finest output during the 1970s, and that presented some of the best chillers from the House of Idea's horror wave. It also happens to be one of the best bit of pulp-style werewolf fiction ever produced, be it in movies, books, or comics. 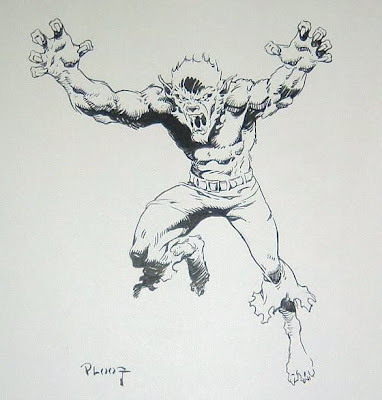 The star of the stories is Jack Russell, a typical, upper-middle class 18-year-old who doesn't like his apparently over-judgemental step-father, but otherwise gets along with this family, namely his mother and his sister Lissa. On his 18th birthday, Jack discovers a problem bigger than his step-father... a family curse manifests itself, and Jack turns into a werewolf. From then on, for at least three nights a month, under the full moon, Jack turns into a beast-man and stalks the hills and streets of Southern California.

"Werewolf By Night" is a series that has weathered the passage of time well. While we have some references to swingin' singles and the occasional hippy finds his way into the series, most of the stories draw upon traditional sources of horror stories (like the aforementioned werewolves, ancient curses, psychics, demons, mad scientists, and even legendary creatures like the Wendigo). Two of the very interesting aspects of the stories in the book is Jack's flirtation with the movie industry--it is set in Southern California, so how could he not find a job with a movie studio?--and the shadowy Committee, which is pops up every now and then to threaten Jack's family and his furry alter-ego. The series pulls off a great mix of horror, adventure, and pulp-fiction sensibility.

Another reason for the book's timelessness is that it is brimming with top-notch stories where the creators are at their finest. Mike Ploog does some of his best work ever during the first six tales in the book, and his art continues to be top-notch on every story he illustrates. Similarly, Tom Sutton and Gil Kane turn in excellent work on the stories they illustrate, with Sutton doing some of the very creepiest work of his illustrious career. (Only one or two of his "I, Vampire" stories a decade later would even come close to the terrifying atmosphere he brought to the "Terror Beneath the Earth" story.)

Similarly, the writers on the strip do some of their best work, with Len Wein and Gerry Conway bringing Jack and the supporting cast around him to fully realized, three-dimensional life. Even many of the villains that Jack fights are intriguing because they have depth to them. The series also manages to maintain a tight control of its direction and continuity, something that the contemporaneous book "Ghost Rider" failed to do. In fact, the only time the sense of internal consistency and believability of the series falters is during its cross-over with "Tomb of Dracula." (There are just a few too many coincidences in the story, and the background for Jack's curse doesn't seem to quite fit with what we've learned previously.) This misstep is minor, however, and it hardly detracts from the over all excellence of the work that everyone did on these comics. Heck, even the team-up between the Werewolf and Spider-Man is a great read, something which I wouldn't have thought likely!

"Essential Werewolf By Night, Vol.1" is a high watermark for comics in general. I recommend it highly for all comics fans. (Sadly, it appears to have gone out of print.)