While in an isolated Tibetan valley searching for a rare flower that only blooms under moonlight, botanist Wilfred Glendon (Hull) is attacked and wounded by strange creature that is half-man, half-beast. Upon his return to London, with his valuable prize in his possesion, he discovers that he now himself transforms into a man-beast by moonlight. The only antidote for his conditition is found within the flower of the rare plant he brought back with them, but when another werewolf (Oland) steals them, will Glendon end up spreading lycanthropy throughout London, perhaps even killing his beloved wife (Hobson) in the process? 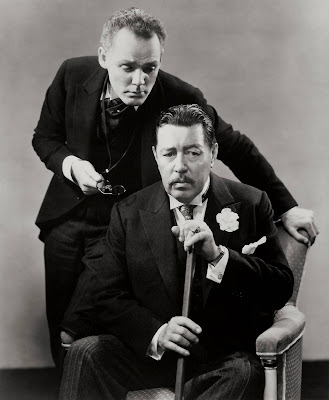 "Werewolf of London" was Universal Studios first attempt at making a werewolf movie, following on the heels of their vampire, Frankenstein Monster, and mummy. It is a solid, entertaining werewolf film that may leave some modern viewers scratching their heads. A weird Tibetan flower supresses lycanthropy? Werewolves remain in control of their mental faculties, but are dominated by a psychopathic need for bloodletting and killing? Werewolves may be strong and fast, but they can be killed as easily as anyone else... no silver bullets or special blessings needed?

What many modern viewers may not realize is that much of what we now consider "fact" about werewolves was invented with "The Wolf Man"--like immunity to any weapon but silver bit--so the absense of these in "Werewolf of London" is to be expected.

Although not terribly successful when first released, and long overshadowed by the run-away hit that was "The Wolf Man", "Werewolf of London" is in some ways superior to "The Wolf Man".

The plot in "Werewolf of Londing" is more solid by far, and the film has a firm grip on its view on werewolves and lycanthropy where "The Wolf Man" seemed to lose track of itself from one scene to the next and kept vacilating in its approach and explanations for lycanthropy. "Werewolf of London" also sports far cooler transformation scenes, despite the fact the werewolf make-up is somewhat minimalist when compared to Shaggy Larry six years down the road. The climax of "Werewolf of London" is also more suspenseful and emotionally impactful than that of "The Wolf Man", in part because this film has a villain seperate from the main werewolf--Warner Oland plays quite the despicable character in this film. (This is also one of the most rare of early horror films: The comic relief characters are actually funny, and they don't detract from the flow of the movie at all!)

On the downside, with the exception of the transformation scenes, "Werewolf of London" is pretty drab when it comes to cinematography. Compared to "The Wolf Man" (or earlier Universal horror efforts even), the sets and lighing are also somewhat dull and uninspired, with Glendon's "artificial moonlight machine" being particularly dissapointing. The biggest strike against this film when compared to "The Wolf Man" is the fact that the main character, Glendon, comes across as an unsympathetic jerk, where, Larry Talbot is basially a nice guy. A few minutes showing him as he was before becoming infected with lycanthropy would have helped a great deal in making us care a little more about him, and thus involve us more strongly in the film.

Although not perfect, "Werewolf of London" is a movie that remains entertaining 75 years after its release. It'll be time well-spent for any big-time fan of werewolf movies.