October is here, and ghosts and goblins and creepy crawlies will soon be showing up all over the place. I'll be celebrating the Month of Monsters with reviews of some of the very best Creature Features to ever grace the silver screen all this month at Terror Titans--click here to check them out--and with a special series of Halloween-themed images on Picture Perfect Wednesdays, here.

However, I'm kicking it all off with one of the best yet often-overlooked Halloween-themed pictures I'm aware of.

It's October 31, and on the very day celebrity theatre critic Mortimor Brewster (Grant) is to secretly marry his fiance (Lane), everything that can go wrong does go wrong. He discovers his spinster aunts (Adair and Hull) are serial killers who have been murdering lonely old men out of what they consider kindness, and that his uncle (Alexander), who believes he is Teddy Roosevelt, has been burying the bodies of in the Panama Canal he is burying in the basement. To make matters even worse, Mortimor's homicidal brother (Massey) shows up, along his unscrupulous plastic surgeon (Lorre) partner-in-crime. 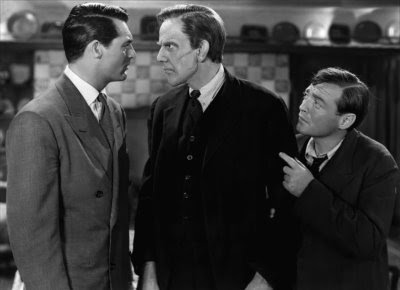 "Arsenic and Old Lace" is one of the best comedies ever made. It's a dark screwball comedy that's driven by its sharp, witty dialogue and characters so loveable you forgive them for being insane serial killers.

Technically, the film is also a masterpiece of direction and staging. The multi-layered routines that take place at several points in the film are gut-busting hilarious, with the one where Grant is describing a bad play he once reviewed to Lorre, while the action of the plot he is relating unfolds behind him. It's even more spectacular the way the film hits the ground running and never stops to catch its breath until the final, snicker-worthy scene. It also doesn't let the audience catch their breath, but keeps viewers giggling and laughing as the film's pace grows more and more frenetic.

Everyone in the cast is perfect, with the interplay between Grant and the two murderous little old ladies--with Grant becoming increasingly agitated and panicky, and Adair & Hull growing increasingly confused because they see nothing wrong in what they do--being particularly hilarious. In fact, Grant's comic timing was probably never more perfect than in this film, and that even includes the one I rank as my favorite comedy starring him, "Bringing Up Baby".

Special mention also needs to go to Lorre, who mumbles his way through his part with hilarious, drunken obliviousness; and to Massey, who manages to be funny and menacing at the same time, in his Boris Karloff-spoofing role.

With its October 31 setting, its dark subject matter, its intelligent script, its perfect staging, and top-notch performances by some great actors, "Arsenic and Old Lace" is great Halloween viewing no matter what sort of movies you're into. (I don't think it makes for good party viewing/background noise, as it's a film that deserves and requires your attention, but it's a definate must-see.)