When a Canadian university is overrun by zombies, it's up to geeky horror film lover Joss to save herself and her roomates, armed only with the Rules of Survival gleaned a lifetime of watching zombie movies and a spork. 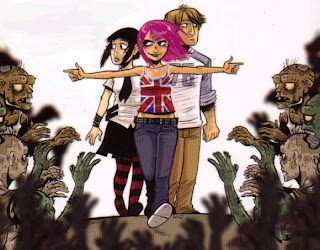 For about two decades, SLG Publishing (formerly Slave Labor Graphics) and its imprint Amaze Ink has been one of the American comic book industry's best-kept secrets. They have quietly been publishing high-quality, quirky comics and graphic novels that really deserve far more recognition and readership than they've ever gotten.

One such book is Faith Erin Hicks' hilarious "Zombies Calling", a breezy graphic novel that moves effortlessly between drama, humor and horror. It's a well-crafted book that entetains and amuses from the first page to the last. Writer/artist Hicks presents a cast of characters that are likeable and funny and that she gets us to care about. Like a good zombie movie, we want them to escape the brain-hungry hoards because we like them... and when Rule Two comes into play ("One person makes the ultimate sacrifice so the rest can live"), the book as as suspenseful as any zombie movie you've seen.

In fact, this book will remind you so strongly of "Zombieland" that you may think Hicks was copying that movie. The truth is, Hicks' book predates "Zombieland", and it's either proof that Great Minds Think Alike, or the writers of "Zombieland" are familiar with the well-kept secret that is SLG Publishing, and intimately familiar with "Zombies Calling".

If you're looking for some light Halloween reading, or perhaps a gift for a zombie lover in your life, you can't go wrong with "Zombies Calling".