Mr. Franz (Hoyt), a demented puppeteer turned dollmaker invents a machine that will shrink living beings to the size of dolls. He uses it on anyone he likes who appears to be exiting his life and keeps them in his workship. When his secretary (Kenney) prepares to leave his employ to marry a likeable traveling salesman (Agar), the couple become his latest victims. 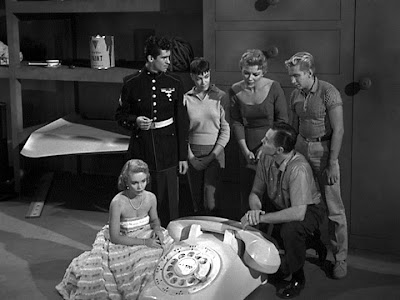 As the title of "Atack of the Puppet People" implies, the main storyline of this film involves a small group of shrunken men and women attempting to escape their captor, and, hopefully, return to their full size. It's an engaging movie--assuming you can buy into the whole "puppeteer shrinking people with mad science wonder-tech" aspect of the story--that is fast-paced and well-acted. Unfortunately, the script isn't quite up to snuff, and it features a number of plot threads that don't go anywhere and an ending that not only just sort of peters out but which leaves the fates of the majority of the puppet people a mystery.

(Even more annoying, for me at least, was that we never got to see the Jekyll/Hyde marionnette in action after all the talk that revolved around it. The scene with the tiny John Agar trashing the marionette was pretty cool, but I still would have liked to see the supposed transforming puppet actually tranform.)