In observation of Edgar Allan Poe's birthday, I'm reposting this review from the companion blog The Bela Lugosi Collection.

After saving young dancer Jean Thatcher (Ware) from certain death through a miraculous feat of neurosurgery, the mentally unstable Dr. Vollin (Lugosi) becomes obsessed with her. When her powerful father makes it clear that Vollin is to stay away from her, Vollin forces a wanted murderer (Karloff) into assisting him in eliminating Jean, her fiance, and her father in hideous death-traps modeled after gruesome scenes from the writing of Edgar Allan Poe. 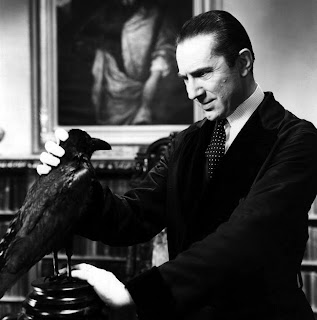 "The Raven" isn't really an adaptation of the Poe work by that name, but is instead the tale of a thoroughly evil and utterly insane man so rich and so obsessed that he's built a house full of secret doors, secret basements, and entire rooms that serve as elevators... all so he can reenact scenes from Poe's writings.

There is plenty of potential in this B-movie, but tepid direction and mostly uninspired lighting and set design leave most of it unrealized. Lugosi is completely over the top in this film, taking center stage as the perfect image of a raving madman. He is ably supported by co-star Karloff who plays the role of the tortured, remorse-filled murderer trapped into serving Vollin with the promise of a new life in the exact opposite direction of Lugosi--remaining subdued as he slinks through each scene he's in. Ware is very attractive in the scenes she's in, but that's about all she is. In fact, the only actors in the film who aren't just so much set decoration are Lugosi and Karloff.

The "torture room" is nifty, and the climax where Dr. Vollin has house guests trapped in a Poe-world of his making is excellent. All in all, an entertaining film, but it would have been much better with a more inspired supporting cast and more creativity on the technical side of the camera.