Marion Crane (Leigh) steals $40,000 from her employer and heads off to start a new life with her lover, Sam Loomis (Gavin). Before she can meet up with him, however, she vanishes without a trace. Sam and her worried sister, Lila (Miles) track her to the isolated Bates Motel, where a soft-spoken young man named Norman (Perkins) struggles under the heavy hand of his shrewish, possessive mother. But Norman is a man who has many dark secrets.... 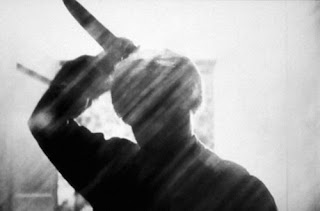 I think everyone reading this knows what Norman is hiding, as well as where Marion and the $40,000 vanished to... but in case someone hasn't seen one of the greatest horror films ever made, I'll keep to my policy of not offering any spoilers.

Suffice it to say that I think this movie must have been absolutely, jaw-dropping in its audacity with the plot-twist that happens about 15-20 minutes in. I doubt anyone could have been prepared for it, and "Psycho" is still remarkable for flawless way it pulls it off... few films can take such a shocking left turn and not spill the audience on the curve. Instead, after the shock wears off--and it IS shocking if you aren't expecting it, even in this day and age when movies go back for reshoots to add violence and nudity--the audience is even more captivating. Where can the movie go from there, they're asking themselves.

"Psycho" is one of Hitchcock's finest movies. The cast is perfect; the script is perfect; the sets are amazing; the camerawork and creative use of lighting is astonishingly creative and effective; and the Bernard Hermann score is absolutely mindblowing (even if I'm not as fond of the "Murder Theme" as so many others are... there are far better bits of music in the film).

If you haven't see it, or if you've seen the pale imitation that was released in 1998 under the guise of a "remake" (and it was an imitation... to call that travesty a "remake" is an insult to genuine remakes, no matter how bad they might be), you need to see "Psycho". It's a film every movie lover should experience.