It's Blade... in black and white 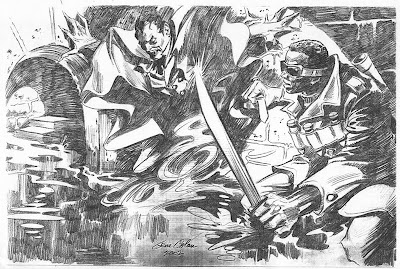 In the 1970s, Marvel Comics published one of the finest horror comics series, ever... "Tomb of Dracula." In issue #10 of that series, writer Marv Wolfman added a tough-talking, black vampire-slayer to the line-up of Dracula's enemies--Blade. A rough-and-tumble streetfighter, this character's trademark was a bandoleer of wooden daggers with which he dispatched vampires with unrivaled efficiency and brutality.

A couple years after his initial appearance, Marvel Comics gave Blade his own solo-series in their "mature" black-and-white comics magazines. The series moved from title to title, as Marvel gradually whittled their commercially unsuccesul magazine line down to nothing, but the lack of readership wasn't the fault of the "Blade" series... those pages were some kick-ass vampire tales (in every sense of the phrase).

The main plotline of the stories collected in "Blade: Black and White" was written by Marv Wolfman and Chris Claremont. It sees Blade pitted against an emerging vampire organization that calls itself "The Legion." These vampires have chosen to target Blade where he lives--by killing his friends, his loved ones, and framing him for murder. It's only with the help of Katherine Fraser, a psychic Scotland Yard detective (another 'Tomb of Dracula' supporting castmember, featured mostly in the 'Giant-sized Tomb of Dracula' series') that Blade will even have a prayer of clearing his name.

This storyline occupies about 2/3rds of the book, and it illustrated primarily by the vastly underappreciated Tony DeZuniga, with some assistance from Rico Rival. The illustrations are top-notch, bringing the sort of gritty reality to the proceedings that the Blade character requires.

The collection is rounded with three additional 'Blade' tales. Two are illustrated by Gene Colan--one dates from the 1970s and in it we see Blade for the first time unable to bring himself to kill vampires... and that hestitation may cost him his life! The second tale was a one-shot issue scripted by novelist Christopher Golden that teamed Blade with his old partner, Hannibal King (who, like Blade, is a far better character in his original comic book incarnation that he is in "Blade" flicks) to take on an emerging vampire threat in New Orleans and confront ghosts from their past. Both tales are great reads, but I think Colan's art has started to degrade a bit. (It doesn't help matteers that the second tale was inked by someone who does't look to be a good match for Colan's pencils.)

Sandwiched between the two Colan stories is a pathetic little 14-pager that 's got bad art, a bad script, and doesn't really fit in with anything else that's been printed about the Blade character. Further, the way Blade is presented is closer to the movies than the comics. I recommend skipping that story entirely, or reading it after you've read the rest. (It should be placed in that order anyway, as there's a reference on the very first page to Blade being in New Orleans.)

"Blade: Black and White" is a collection of some fine horror comics (with one noted exception) from a time when vampires were monsters and men's men were devoted to their destruction. If you like horror comics and vampire tales, I recommend this book. (I'd leave the movies for when you have seen everything else interesting at the videostore. They are but pale reflections of the original source material.)

Note: The illo at the top of this article is by the great Gene Colan. To see more of his artwork, visit his webiste by clicking here.
Posted by Steve Miller at 10:42 PM