Men, dressed for jungle safaris and shot with poisoned darts, are turning up near the manor of retired army officer Colonel Rawlings (Fraser). Government problem-solvers John Steed (Macnee) and Emma Peel (Rigg) are tasked with getting to the bottom of the mystery and stopping the violence before scandal occurs. 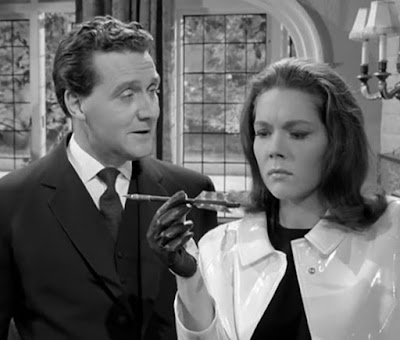 "Small Game for Big Hunters" features both the best and the worst of what "The Avengers" series has to offer.
First the good. It's got a supremely goofy plot that everyone treats with the utmost seriousness and straight faces of characters who exist in a comic-book universe where, on the outskirts of London, a delusion military officer can be kept within a recreation of a British military outpost in colonial Africa while his staff execute evil schemes--and no one notices for an extended period of time. It's also got comic relief characters who are, likewise, treated with absolute seriousness by those around them, because, again, everyone exists in a comic book universe where Crazy is Normal. This is the sort stuff, along with witty banter between Steed and Peel, that make most episodes of this series such a joy to watch.
On the downside, it's got an incoherent plot that sometimes seems to lose track of its own story-threads, which is made worse and even more obvious due to the way there are two separate narrative tracks for most of this episode, one of which is not all that interesting... and it's made worse by some comedic antics that aren't all that funny. At least we're not subjected to the all-too-common action/fight scenes that are so badly rehearsed and/or badly choreographed that one has to wonder if people actually got paid for working on the show--it would have dragged the rating down from a Seven to a Six. It might have been a rating of 5 if not for a couple twists that I didn't see coming, and for the clever social commentary on the faded British empire and the insanity (and inanity) of those who were still trying to revive it as late the the 1960s.
All that said, Diana Rigg's performance in this episode is also one of the strongest things about it, because it made me realize something that hadn't quite clicked before: She always seems to dial up the intensity of her performance if her Emma Peel character has been parked in the more boring parts of an episode, like she is here. It adds a greater sense of drama or comedy to sequences that are otherwise borderline drab. (Here, Rigg's dialed-up intensity saves a few scenes from coming across as too frivolous or silly.) .