'They Saved Hitler's Brain': A bad movie
that didn't improve when expanded by 30 mins

They Saved Hitler's Brain (1974 (?))
Starring: Lots of mustaches and a couple of blondes.
Director: David Bradley and someone working for "Paragon Production"
Rating: Three of Ten Stars

"They Saved Hitler's Brain" is a television edit of "The Madmen of Madragor", a film about a clumsy international conspiracy orchestrated by Nazis and Hitler's head-in-a-jar from a diamond-rich South American country. For the bulk of the details about the film, read my review of the original version by clicking here. 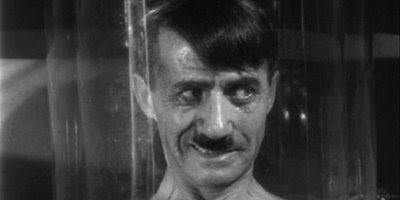 When producers looked into selling the film to television in the late 1960s, they discovered it was too short for the two-hour programming time block occupied by movies--which needed to be 92 minutes, with the remaining 28 minutes being occupied by commericals.

So, they shot an additional 30 minutes of film, expanding the original plot of "The Mad Men of Madragor" to inclue a spy-vs-spy angle with intelligence agencies from around the globe (I think) shooting at each other and performing asassinations in order to make sure that only they have the secret of the super nervegas at the center of the story.

The filmmakers charged with expanding the film TRIED to make their new material match the original footage, but I think budget and time conspired against them. Basically, the agents from the new storyline sport 1970s hairstyles and clothing styles, and they clash when they are intercut with the cast with their 1960s crewcuts and fashions. Government agents cruising around in a VW Bug is a particularly amusing aspect of the additions to the film, even if it wasn't intended to be amusing.

A worse slip-up made in the efforts to expand the film is a continuity gaffe of such epic scale that one wonders if whoever scripted that new half-hour bothered to sit through the original movie; a big deal is made out of the fact that only two scientists know the formula for the deadly nerve gas that Nazis are threatening to unleash on the world. However, in other scenes, the gas formula has already been acquired by "foreign powers", but the antidote is still a well-guarded American secret which makes it useless as a weapon (or so the filmmakers believed, in an innocent time before Islamic suicide bombing psychos started making Nazis look like choir boys).

All in all, the 30 minutes of additional material neither adds or subtracts particularly from the film. It doesn't fix any of the problems with the original, and while it offers a bit more action up front than the film contained originally, it creates new continuity flubs.

"Mad Men of Madragor" still has a slight advantage, though, as it's shorter. Unless you REALLY want to torture yourself, go with the original instead of "They Saved Hitler's Brain"; it may have a sexier title--which I remain astonished that they didn't use on the original film--but "Mad Men" is more to the point.