'Blackout' may put you off the bottle

An American drinking away his sorrows in London (Clark) is offered a large sum of money by a young woman (Lee) if he will marry her. He wakes up the next morning with a pocket full of cash, blood on his coat, and no recollection of happened after his "engagement" in the bar. However, his "wife" is nowhere to by found, and the newspapers are full of the news that her wealthy father was murdered the night before. 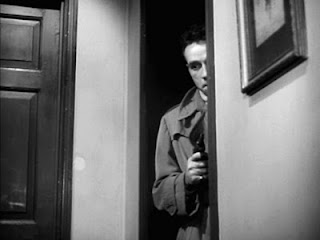 "Blackout" may be the best of the film noir-style pictures produced by the venerable British film studio Hammer, first with American B-movie producer Robert Lippert and later with Columbia Pictures. I haven't watched them all, but this one was by far the most interesting of a batch of films that are undeservedly obscure.

Dane Clark excels here as an Everyman who suddenly finds him thrust into a world of deception, intrigue, and murder. The script is expertly paced as the story of his efforts to find out what sort of trouble he is in, so he can find a way out, and the red herrings and plot reversals and surprise twists are all perfectly timed. This is one mystery that will keep you guessing almost up to the very end as to who is behind the killings and why.

The rest of the cast also does a fine job, although Belinda Lee--who plays the girl who marries Clark, either to escape impending forced nuptials or to frame him for murder--was probably hired more for her beauty than her acting talent. She is perfect at playing a distant upper-class snob, but falters when called upon to do anything else. Of course, Lee might just be suffering in comparison to strong and experienced character actors like Clark and Elanor Summerfield--who plays an artist who helps Cook on his quest of discovery, and whose performance and character is so much more lively than Lee's that one hopes that she is the Clark will end up with in the end--as she was just 19 and this was her first major film role.

Then again, good performances from the actors, along with plenty of striking visuals, are to be expected when Terence Fisher is at the helm of a picture. He rarely disappoints, and he doesn't do so with this one, either.

Fans of film noir pictures and well-crafted mysteries will appreciate this film... especially since it comes bundled cheaply with other neglected Hammer Films mysteries.