When struggling musician Cab (Calloway) and his band are on the verge of their first big break, his jealous girlfriend Minnie (Le Gon) gets him embroiled in a fight with a deadly gangster (Wiltshire) because she believes he is having an affair with his female manager (James). 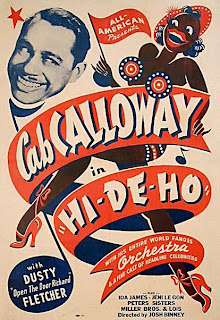 Made primarily for theaters that catered to black audiences in the segregated south, "Hi-De-Ho" is a short movie that is first and foremost a showcase for bandleader and legendary jazz man Cab Calloway. The paper-thin plot is just an excuse to move us from Calloway performance to Calloway performance, and it vanishes almost entirely at the halfway point where it gives way to a supposed club performance by Calloway and several other very talented, real-world acts from the late 1940s. It is so perfunctory that when three people die in a shoot-out, including one innocent bystander, the police's reaction is basically to walk away while saying, "Hey, great job killing those gangsters, Cab! Good riddance to them!"

This film is of interest only to fans jazz, scat-music, and great big band performances. Calloway does show himself to be a better actor than many of his fellow musicians--like when he is performing a mournful acapella version of "Minnie's a Hep Cat Now" (a song he performs earlier in an upbeat fashion).

Surprisingly, Calloway doesn't perform "Minnie the Moocher", the song he is perhaps best known for today--especially considering that song includes the "Hi-De-Ho" phrase from the movie's title and he refers to the Minnie character as a moocher at one point. Of course, the film more than makes up for its absence a song title "I am the Hi-De-Ho Man" and the aforementioned "Minnie's a Hep-Cat Now".

The target audience for this movie--fans of Cab Calloway and 1940s jazz--will love this movie. I would even recommend that wanna-be musicians check it out, especially if you're fancying yourself a hip-hop or rap artist. You will find some things in this movie that may surprise you. Everyone else can't help but be awed by the talent and energy of Calloway... although you will likely find yourself wishing for a little more story to go with the excellent musical numbers.