'The Seventh Victim' has more emphasis on mood than story coherence

Mary (Hunter) leaves school to find her older sister (Brooks), who has gone mysteriously missing after selling the family business. After a detective she hires is murdered, Mary turns to the man her sister was having an affair with (Conway) and her sister's husband (Beaumont) for help, but when it becomes apparent that her sister had become involved with a secretive cult of devil-worshipers, will there be anyone she can trust? 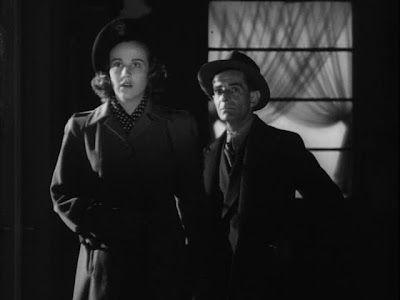 There is no question that "The Seventh Victim" is a highly unusual and artfully made horror film. Every scene, and nearly every frame, is full of horror, dread, and a mysterious dream-like quality. Almost every scene holds within it either a double-meaning, hidden meaning, or foreshadowing or illumination of a plot development that is so subtle that viewers may not catch it until they watch the film a second time. Like a dream, the film unfolds like a jumble of barely connected scenes and events, events that on the surface seem simple or perhaps a bit nonsensical, but each has a deeper meaning that ties them to one another and the overall theme of the movie.

And the theme of the film can best be described as "no one gets out alive." Although a simple mystery tale on the surface, the deeper thrust of the film is to present life as a journey that takes us from innocence, to corruption, and ultimately death.

Of course, I may be imposing something on the film that isn't actually there, because, like the dreams it seems to emulate, many of its elements are only half formed. The relationship between Mary and her sister remains murky to the viewer, despite Mary's insistence they are close; there are two romantic plots that are even more murky; the Satanic cult at the film's heart is a bizarre and ill-defined contradiction in that they abhor violence yet are committed to spreading death in the world; and it's never quite clear whether the Tom Conway character is a hero, villain, or something in between. That said, the fact that the first place Mary visits after leaving the all-girl's convent school she had been living at is a shady restaurant called Dante's, and the recurring themes of darkness and death throughout the movie provide more than ample support for my interpretation.

Like all of the films Val Lewton produced for RKO, "The Seventh Victim" is a remarkable and unique film. Although not as groundbreaking as "Cat People" or as intense as "The Body Snatcher", it is still fascinating to watch, especially because its vagueness of meaning and plot, and the way its various scenes don't seem to quite connect to one another, should be weaknesses yet become the very things that keep viewers engaged as chills run down their spines. It may not be the sort of film to show at a free-wheeling Halloween party, but anyone who claims to be a fan of "intelligent horror" needs to experience this movie.