'Halo and Sprocket' is a must-read

"Halo and Sprocket" is the story of Katie, a young single woman, and her two roommates, Halo the Angel and Sprocket the Robot. More accurately, it's a series of short stories, each revolving around some everyday activity or social convention so commonplace that most people don't even think twice about, but which may seem baffling or downright twisted to someone who has little or no understanding of human behavior or societal conventions. 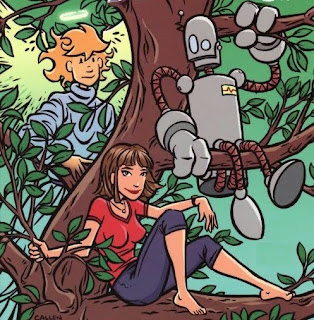 And in each "Halo and Sprocket" tale, Katie is faced either with trying to explain some "fact of life" to a pair of genuinely interested pupils, or trying to deal with problems that arise from their attempts to implement what they have learned (or think they have learned). These stories are short and straight-forward, and they manage to be very insightful while poking fun at social standards and commonly held beliefs without being cruel, rather sweet in tone without being sappy, and even romantic without lapsing into sentimentality. Callen also shows himself to be master of just about every stripe of comedy, from the lowest of slapstick humor to more convoluted gags involving metaphysics, philosophy, and even the alphabet.

Callen presents his stories with a clean, classical cartoon style, with expert comic timing through sharply written dialogue and perfectly designed panels and pages. It's another one of the countless comics that deserved to a much bigger success that it was. It deserved to consist of twenty volumes, instead of just the two.

The stories in the books run varying lengths, with the longest ones being 14 pages and the shortest ones being as a page, and each being just the right length to deliver Callen's punch lines. The first volume also includes a a collection of sketches and early comic strips that show the creative evolution of Katie and her two unusual roommates.

For more about "Halo and Sprocket," visit Kerry Callen's webite. You can read some Halo and Sprocket strips there, although my personal favorites are "About Face" (in which Sprocket tries to find a way to express anger) and "But is it Art" (in which the gang visits a street fair and Halo and Sprocket learn about artwork) from Volume One, and "Food for Thought" (where the gang goes on a picnic and Halo uses his divine powers to temporarily make Sprocket human) and "Trivial Consequences" (where Katie sets out to first trick Halo into revealing secrets of the Universe and later to simply pull a practical joke on him) in Volume Two. 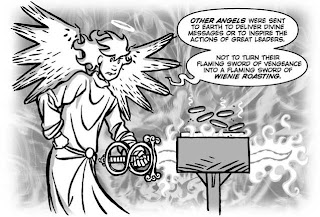 I think anyone who enjoys gentle, intelligent humor and well-drawn comics will find the "Halo and Sprocket" books worthy additions to their personal library.