Be careful not to wake 'The Sleeping Tiger'

A psychotherapist (Knox) invites a wanted criminal (Bogarde) to stay in his home in the hopes of finding a solid treatment for criminal behavior. The experiment starts to go awry when the doctor's sociopathic, bored wife (Smith) starts an affair with the criminal in the hopes that she will run away with her. 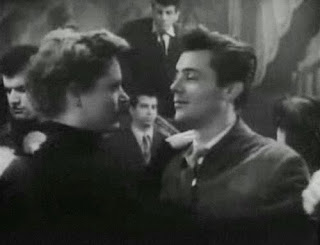 "The Sleeping Tiger" is an overblown melodrama with just enough character development and film noir elements to make it interesting. A decent cast also helps the movie along quite nicely.

Dirk Bogarde--as the young career criminal who finds himself caught between a rock and a hard place, but who might find his way to a new life if he can go straight--and Alexis Smith--as a gorgeous and deeply twisted woman who has everything except a soul) give outstanding performances, with Alexander Knox providing a fine backdrop for them to play off, as he plays a bland but unshakably confident man of science who only has thoughts of his experiment.

There's nothing really outstanding about this British excursion into the film noir/crime drama genre, but there's also nothing particularly awful. It's one of those films that's worth checking out if you notice it included in a DVD multipack, or if it shows up on some cable channel, but it's not worth going out of your way for.