A Korean War vet (Sinatra) fights off brainwashing and becomes the only man who can stop a far-reaching plot by the Chinese to place their handpicked agent in the highest elected office of the United States--the Presidency. "The Manchurian Candidate" is one of those movies that truly is a classic. Not only is it spectacular film--with a suspenseful script, great camera work and even greater acting by everyone who appears on screen. Although over two hours in lenght, the film doesn't contain a dull moment, and you will absolutely grow to hate Angela Lansbury's evil, power-at-any-cost bitch of a political femme fatale.

While some of the details may date this movie, the characters and storyline remain as fresh and relevant-seeming today as they were in 1962. While I find the entire film engrossing, with one tiny exception, I find it particularly interesting that while I felt sympathy for Alexander Sebastian in "Notorious" (review here), I have nothing but contempt and disgust for Senator John Iselin (James Gregory) in this film. Both characters are men who are dominated by evil mothers with similar goals in mind. Perhaps the difference is that there seems to be a spark of decency in Sebastian, while Iselin is nothing but a perverted puppet of his twisted mother. Maybe it's the way we see Sebastian's heart break when he discovers that he has been betrayed by the woman he loves, and we have no similar moment to make Iselin less gross. 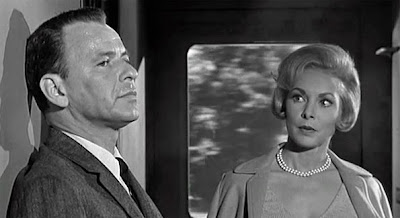 Speaking women and love, the romantic element of this film is the one part of it that I simply couldn't buy. As much as I thought both Frank Sinatra and Janet Leigh were great in their parts (as good as any in their careers, not to mention unique), the Insta-Romance that sprang up between them when they met on the train just didn't ring true to me. I kept expected her to be revealed as a spy of some sort--that the romantic attraction was part of the brainwashing, or that she was perhaps an American agent of some sort. Neither came to pass in the film. I suppose this is another similarity I see between this film and Alfred Hitchcock's "Notorious"... the film's hero and heroine have a forced romance Just Because.

With the exception of the romance misstep, "The Manchurian Candidate" is a fabulous political thriller that I think fans of the genre definitely need to see.